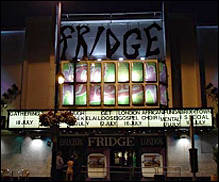 BRIXTON, UK (VIP-NEWS) — The management of The Fridge in Brixton has been taken back into the hands of owners Andrew Czezowski and Susan Carrington, and is currently being dusted down and spruced up as a major live music venue once again.


The Fridge has been rewired, cleaned up and a massive new PA and lighting system has been installed, adding to the wonderful full size stage facilities, with direct loading from rear of venue, parking space, and three changing rooms with toilet and shower facility.


Over £150,000 has been spent on re-establishing the Fridge as a mainstream live music venue, capable of staging both intimate, 500 capacity club gigs (with the balcony closed) as well as 1400 capacity concerts and indoor festivals.


Originally opened in 1913 as a cine-variety theatre, it retains all the original Edwardian Baroque /Art Deco friezes (highlighted in gold on black) and boasts fantastic acoustics and sightlines for gig goers – as old cinemas always do.


The Fridge in Brixton is one of only a handful of decent mid-size venues left in the capital; with demise of the Astoria, the only comparable venues (on a Tube line) remaining in operation are Koko in Camden and The Forum in Kentish Town. Co-incidentally, only the Fridge and Koko are fully independent and not part of any major chain of venues.


A wide range of live gigs and club nights are in the process of being organised for January 31st onwards, with various outside promoters already getting back on board and keen to put The Fridge back on to the national gig circuit map.


Having begun their careers as seminal live rock gig promoters (the duo established The Roxy, the world’s first punk club in Covent Garden London in 1976/77) Andrew, [ex-manager of the Damned, Generation X with Billy Idol, Adam Ant etc.] and Susan then opened the Fridge, shortly after the riots in Brixton in 1981.


The Fridge hosted the first gigs of acts such as the Pet Shop Boys, Jimmy Sommerville & Bronski Beat, Sade, Nick Cave with The Bad Seeds and Marc Almond, and later promoted everyone from The Sun Ra Arkestra (their last ever gig in the UK), to Eartha Kitt, Grace Jones, St Etienne, Roy Ayers, Gil Scott-Herron, Nico, (unfortunately also her last gig ever) and Take That. With Robbie.


The Fridge additionally won a reputation for world famous club nights such as Talkin' Loud and Soul II Soul, and then drove the explosion of rave in the 90’s by becoming the home for long-running trance nights Escape from Samsara, Return to the Source, Pendragon and Logic.


Gay night Love Muscle pushed buttons and boundaries to such an extent it changed the direction of Gay night clubbing. Andrew and Susan also created the most successful Lesbian club in the World, first with Eves Revenge, followed by Venus Rising, regularly attracting over 1300 lesbian clubbers every month.


In January of 2004 Andrew and Susan let out the Fridge and took a long deserved break until November 3rd 2008, when they took back full management and ownership of the best club in London, located in Brixton, the capital of live music in South London.