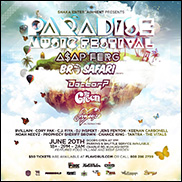 KAHUKU, Hawaii (CelebrityAccess) — A Hawaiian music festival billed as the "biggest music festival Hawaii has ever seen" was reworked less than 24 hours before it was set to start over apparent permit issues.

According to local news outlet KHON, Paradise Music Festival promoter Shaka Entertainment were unable to obtain a permit to use a private military road that provided access to the festival site.

Instead of the music festival, acts were moved to a number of smaller venues in the region with the festival becoming a "bar crawl."

“So, as you know, as a team we worked really hard to get everything together and get everything situated,” Austin Dimaya, the festival's operation manager told KHON. “We had everything set, permit was fine. We had the land all set. But unfortunately, the day before the event, the owner did not and could not get us a grant on Charlie Road, which is a private military road. Unfortunately, that’s what had to shut down operations, in which they locked all of our equipment and won’t give us access to it.”

The last minute change of plans for the event was apparently not widely circulated and some fans were left feeling frustrated after arriving at the venue on the day of the event only to find a 'cancelled' sign.

Compounding the frustration is are apparent inconsistencies in the festival's refund policy. Organizers for the event, which was originally sold as 18-and-over, promised refunds to under-21 ticket holders, but KHON later reported that some ticketholders had been denied refunds under a change of venue clause. – Staff Writers