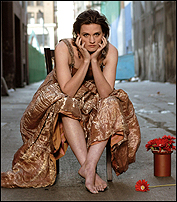 (CelebrityAccess MediaWire) — Jazz diva Madeleine Peyroux has been causing quite a bit of trouble after she mysteriously “vanished” in England last week, according to BBC reports.

The trouble began when Peyroux didn’t show up for a promotional event, according to Universal Classics, which handles her British licensing. Universal hired a private detective after a week’s worth of unsuccessful attempts to contact her. The detective caught up with the missing singer…at her manager’s office.

Bill Holland of Universal Classics and Jazz told the BBC, “Much to our embarrassment, she was with her manager in New York.”

Holland also told the BBC that Peyroux “doesn’t want to see anyone” and added that he was “fed up with” her behavior.

According to her manager, Peyroux was not happy with the amount of promotional work she felt forced to do for her latest album, 2004’s “Careless Love,” and needed a break. Peyroux had “disappeared” in the past, as well, including leaving the music world after her 1996 debut album, “Dreamland,” to busk on the streets of Paris for seven years.

To make matters even more interesting, Peyroux’s manager told a New York Times interviewer that the singer had never actually disappeared and that the BBC story was based on a hoax.

“She was never missing. She’s fine and looking forward to going back on the road,” manager Cynthia B. Herbst told the paper.

Rounder Records, Peyroux’s U.S. label, released a statement that read, “Recent reports regarding Madeleine Peyroux are the result of a hoax story planed in the U.K.”

Despite all of the confusion, Peyroux’s September appearances are still planned as scheduled.