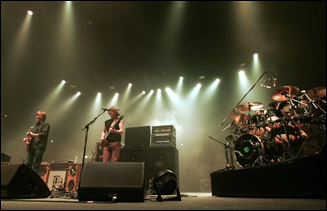 MORRISON , CO (CelebrityAccess MediaWire) — After much speculation it’s official, Phish returns to Red Rocks for a four-night stand in Colorado, marking its first shows at the legendary venue in more than 13 years.

Tickets will go on sale to the general public beginning Thursday, March 26th. The announcement comes on the heels of the band’s three-night stand at Hampton Coliseum in Hampton, VA last weekend. “Over a massive, four-hour set, guitarist Trey Anastasio, bassist Mike Gordon, drummer Jon Fishman and keyboardist Page McConnell ripped through dozens of crowd-favorites,” said rollingstone.com. “They kicked things off with some of their most compositionally complex tunes, from the knotted prog-funk of ‘Fluffhead’ to ‘Divided Sky,’ where the group’s quiet, mellifluous interplay of guitar, drums, bass and keys suggests they’re as well-oiled of a machine as they’ve ever been.”

The New York Times, which ran two features on the concerts, noted: “as the opening passage of the anthem ‘Fluffhead’ enveloped the room, the eruption of exultation was not merely for the band itself but also for the millions in the Phish diaspora who make up perhaps the most fervent fandom in pop music,” while USA Today said: “the foursome built the backbone of its first set on old-school material, expertly navigating hairpin changes and showing as much spunk as they ever have in this millennium.”

The band has already recorded demos of 20 new songs and will enter the studio in April to begin work on its new album with Steve Lillywhite (U2, Rolling Stones, Dave Matthews Band), who produced Phish’s 1996 album, Billy Breathes.

Formed at the University of Vermont in 1983, the Grammy-nominated band was included in the Top 10 Grossing Concert Tours in North America from 1995-2000 and from 2002-2004. Phish has released 11 studio albums, six concert videos and a series of 44 complete live concert CDs, including 13 on its own JEMP Records. Its series of full concert downloads on livephish.com, the band’s digital download store, currently totals 91. –by CelebrityAccess Staff Writers