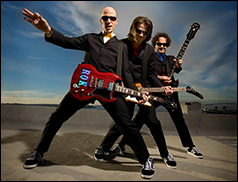 SEATTLE (CelebrityAccess) — Alt-rock group Presidents Of The United States Of America announced that they have split up.

Best known for a string of hits in the 1990s that included "Lump" and "Peaches" announced their dissolution in a Facebook post.

Dear PUSA fans. You may have noticed that PUSA has been quiet since the summer of 2015 and here is why…we are no longer functioning as a band. Call it what you will but we have quietly retired from the PUSA business since we are OLD PEOPLE NOW! 😉 "Never say never" is a good motto in these cases however we wanted to let you all officially know what is up so you don't have to fret or wonder. Thanks for all the singing and clapping and happy times and WE LOVE YOU!
Chris

PS – (a little later) THANK YOU PEEPS! for all the nice notes and thoughts! It is not REALLY that we are OLD…it is just time to move on is all…creative interests change and mutate and I am just trying to follow my instincts and do what thrills me most and part of that is about moving on.

The group, consisting most recently of Chris Ballew (vocals, bass), Jason Finn (Jason Finn), and Andrew McKeag (Andrew McKeag), had broken up several times over the years, but had been active since reforming in 2010 with their most recent album, 2014's "Kudos to You!" released via PledgeMusic. – Staff Writers