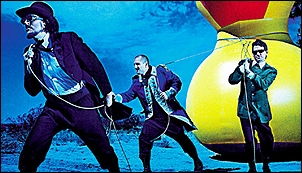 (CelebrityAccess News Service) – Primus are reuniting the group's classic line-up for the first time in seven years with bassist-singer-ringmaster Les Claypool and guitarist Larry Lalonde re-enlisting seminal drummer Tim Alexander for the first time since his 1996 departure. Primus will embark on a limited national tour kicking off on October 14 in Davis, CA and winding down on November 20 in Burlington, VT. The tour will support the EP/DVD Animals Should Not Try to Act Like People (Interscope Records) to be released October 7 that features five new songs, all the band's videos, previously unreleased live performances and more.

The 2003 "Tour de Fromage" will be a multi-media theatrical stage production with two full sets by the band. The first set will vary on a nightly basis sampling from the band's vast repertoire. The second set will be a one time only start to finish performance of the pinnacle Primus masterpiece Sailing The Seas Of Cheese. "The spontaneous visual presentation and the varied song selection will insure that no two performances will be the same," says Claypool, who has spent the last three years creating and collaborating on a range of projects with a wide array of influential musicians.

The band's show at the Warfield Theatre in their hometown of San Francisco sold out in a swift 20 minutes. Due to overwhelming demand, the band has added a second show at both the Warfield in San Francisco and the Wiltern in Los Angeles. Adds Claypool, "It's amazing to me the response we've had for this upcoming tour. Tickets are blowing out. The hype around these shows is something I haven't seen in the history of Primus."