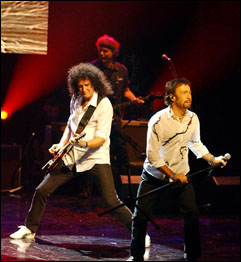 Having sold out their forthcoming UK tour within hours of announcing their return to live performance after almost 20 years, Queen, who are to perform with vocalist/musician Paul Rodgers, has added extra dates, which will include a massive outdoor concert in Hyde Park on July 8. The Hyde Park concert is one of four outdoor dates the band will now play this summer–the others are in Portugal, Germany and the Netherlands–all in July.

In response to huge demand, Queen has now also added Dublin and Belfast dates to the first leg of the tour. Instead of ending as originally planned on May 11 at Wembley Pavillion, the Queen + Paul Rodgers tour has been extended to include the Odyssey Arena in Belfast on May 13 and The Point Depot in Dublin on May 14.

The Hyde Park concert will see the band return after almost 30 years to the setting of one of its earliest landmark concerts.

Playing a free show on September 18, 1976, Queen attracted a record crowd of over 150,000 to the Royal Park, one of the biggest audiences for any concert ever held in the capital.

The Queen + Paul Rodgers tour will now play 32 dates across Europe. The tour is preceded by a benefit concert for Nelson Mandela's 46664 campaign in Fancourt, George, South Africa on March 19 when they play their first live concert together. The band spearheads this music fundraising and HIV/AIDS awareness event in the presence of ormer president Nelson Mandela joined by other artists, including Annie Lennox, Katie Melua, India.Arie and actor/singer Will Smith, together with a host of South Africa's premier artists.

May 14 Dublin The Point Depot