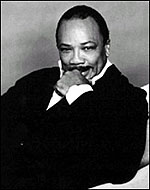 (CelebrityAccess MediaWire) — Nearly two decades after producing the historic "We Are The World" recording, Quincy Jones will gather many of the world's best-recognized artists and personalities for a global concert marking the launch of a worldwide humanitarian effort aimed at helping children in war-ravaged cities. "We Are The Future" will take over Rome's Circus Maximus on May 16 for a globally telecast and webcast concert to draw the eyes of the world to the alarming increase in mortality rates among children in these areas.

The event is free, but 100 percent of the proceeds from the concert's broadcast and related merchandise sales will benefit "We Are The Future" programs, including child centers in six cities worldwide. The first center opened April 8 in Kigali, Rwanda. Other centers will open later this year in Addis Ababa, Ethiopia; Asmara, Eritrea; Freetown, Sierra Leone; Kabul, Afghanistan; and Nablus on the West Bank.

In the last decade alone, 2 million children were killed, 6 million injured and 12 million left homeless as the result of regional conflicts. In developing countries that are in conflict or post-conflict situations, 30,000 children under the age of five die every day, many from easily preventable causes. Concert producer Quincy Jones said, "This event is a clarion call to the world to take notice of the plight of children everywhere. Mortality rates among children are soaring and the international community must respond. We believe that 'We Are The Future' is an important first step."

"We Are The Future" is the collective dream of Quincy Jones' Listen Up Foundation, The Glocal Forum, founded by chief Oslo Peace Accords negotiator Uri Savir, and visionary leader for peace Hani Masri. Together in a strategic partnership with the World Bank and its president James Wolfensohn, and with the City of Rome and its Mayor Walter Veltroni, the "We Are The Future" co-founders are working to improve the lives of children victimized by conflict.