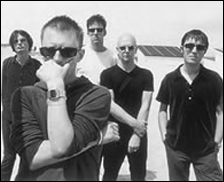 LONDON (VIP NEWS) — Radiohead is surveying fans about their travel arrangements for the band's world tour this year to help minimize carbon emissions on future live outings. The three-month trek began in Florida May 5 and wound up in Berlin July 8.

The U.K. alternative rock band has contacted ticket buyers in order to determine the carbon footprint of fans traveling to and from their shows. Respondents are informed of their personal carbon footprint and will be rewarded with a souvenir live track from Radiohead's tour.

The band deliberately played city centers on this tour to encourage use of public transport, following a study it commissioned for its previous tours by Oxford company Best Foot Forward. As well as encouraging fans to cut down on car travel, the band took measures such as freighting stage equipment by sea, introducing more energy efficient LED-lighting and traveling as little as possible by air, according to Billboard.