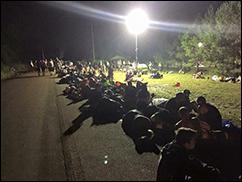 CHATTAHOOCHEE HILLS, Georgia (CelebrityAccess) — Rain and muddy roads left what reports describe as thousands of festivalgoers at the TomorrowWorld festival stranded over night after the festival ended on Saturday after festival organizers.

According to numerous media reports, festival organizers stopped allowing shuttles, ubers and cabs access to pick up sites near the festival, leaving people sleeping on the ground, or on cars overnight, while others walked 5-10 miles to find shelter or other transportation options.

“It was complete chaos,” Danielle Bagnuolo told the Atlanta Journal-Constitution during a Monday morning interview.

Valerie, another attendee at the event, told Mashable that after leaving the festival at 12:30, they waited in a shuttle line for two hours before being told to walk several miles to another shuttle stop. "It was unfair for them to tell us to 'keep walking, there are shuttles a few miles down the road' when they already knew all of them had been canceled," she told Mashable, adding that there was no transportation available at the second checkpoint. Valerie was eventually picked up at 7AM by her husband, who did not attend the festival.

The inclement weather induced festival organizers to cancel the final day of the festival for commuters, leaving only people with camping passes with access to the festival.