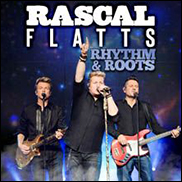 “We had such a great time at The Joint earlier this year,” said Joe Don Rooney. “Being the first country act to have a residency there we didn’t really know what to expect. The shows were wild and we knew that if given the chance we would come running back. We are going to mix it up a bit this time and are working through ideas on how to make it a different experience for the fans. It’s Vegas, so you can bet we’re gonna be stepping up our game.”

The residency starts on February 17th and runs through March 5th.

The group is one of the biggest acts in country music today, with more than 22.8 million million album sales, 29 million downloads and more than 9 million concert tickets sold on their behalf.

“We took a huge leap of faith by switching up our signature rock ‘n’ roll residencies and bringing in a country music group,” said Chas Smith, vice president of entertainment at Hard Rock Hotel & Casino. “Rascal Flatts really knocked it out of the park and helped influence a lot of other country music programming on property. We are extremely excited to have these guys back at The Joint for what is sure to be another successful residency.” – Staff Writers