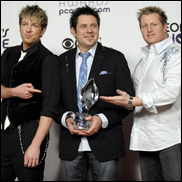 NEW YORK (CelebrityAccess MediaWire) — People's Choice Award winner for Favorite Group of 2008, Rascal Flatts pays tribute to their fans by asking them to choose the cover art for their next album, Unstoppable, due out April 7, 2009. In January, Rascal Flatts teamed up with People's Choice and invited fans to submit original cover designs for their upcoming album. The top four submissions have been chosen by the band and voting is now open to all at www.pcaVOTE.com.

The new cover art for ‘Unstoppable' is scheduled to be revealed live during a Rascal Flatts concert in New York City's Madison Square Garden on Thursday, February 12. The top four designs were submitted by Rick Brewer from Fenton, MO, Christopher Cox from Venus, TX, Garret Dickerson from Greenbrier, TN and Chris Kubik from Arlington Heights, IL


.
"We were very impressed with all the entries and it was a difficult decision to narrow down the possibilities to just these four," said Jay DeMarcus of Rascal Flatts. "We can't imagine how hard it will be for the fans to choose just one!"

"At the beginning of this partnership, Rascal Flatts came to us looking for a way to thank their fans for years of unwavering support and dedication," said Fred Nelson, President, People's Choice. "By working together to develop this album cover contest and vote, we at People's Choice are thrilled to help bring this request to fruition and get the fans involved in such an important decision."

By partnering with Rascal Flatts, People's Choice continues its mission to empower music, movie and television enthusiasts with a voice in the entertainment industry. Last November, through a partnership with E! Entertainment Television, People's Choice members programmed a marathon for the network's Thanksgiving Day lineup. Currently, People's Choice is working with Queen Latifah to discover a new talent that will be featured on her next album, Persona. –by CelebrityAccess Staff Writers