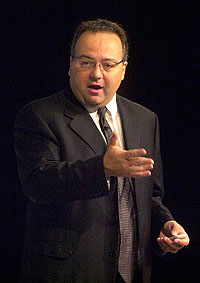 By expecting the second quarter revenue to be between $42.5 million and $45.0 million. This represents a sequential decline from revenue of $47.2 million reported for the first quarter. The lower revenue expectation reflects weakness in the Company's systems software business this quarter, due primarily to some corporations reducing or delaying their information technology spending, contrary to earlier expectations.

Conversely, RealNetworks' consumer subscription business continues to grow. As of today, there are now more than 700,000 paying subscribers to RealNetworks' premium subscription services, compared to 600,000 announced in April. Last week, RealNetworks launched a European edition of RealOne SuperPass with premium content from partners such as BBC, Champions League soccer from UEFA, Big Brother 3 from UK/Channel 4, CNN Europe and MTV Europe.

Due to the decrease in revenue from the higher margin systems business, gross margins are expected to be below expectations, as system software sales will comprise a smaller portion of overall revenues. Given the combination of weakness in the systems software revenue, growth in overall consumer revenue, RealNetworks expects a net loss of $0.01 to $0.02 per share.

"While we are disappointed with the expected results of our systems business, they reflect a trend that several others in the industry are seeing as well," stated Rob Glaser, Chairman and CEO. "On the other hand, our consumer subscription business continues to show strong growth. More generally, we believe that the continued growth in consumer demand for IP- based streaming and media delivery positions all of RealNetworks' businesses very well for the future."