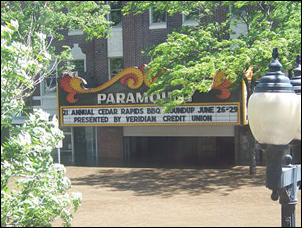 The Paramount Theatre, built in 1928 and listed on the National Register of Historic Places, was devastated by the flood, which reached a record crest of 31.2 feet – nearly 20 feet above flood stage and 12 feet above the previous record flood set in 1929. The flood overran more than 400 city blocks, displacing an estimated 24,000 residents in a city of 120,000. The entire downtown area was engulfed in water and initial damage estimates were in excess of $730 million. The area has been declared a Presidential Disaster Area, making it eligible for FEMA funds.

At its crest, waters from the flood lapped at the marquee signage above the Paramount’s main entrance. An extensive examination of the Paramount Theatre, which underwent a $7.8 million renovation in 2003, is scheduled for later this week. However, it is known that the “Mighty Wurlitzer” organ was ruined, and most of the exterior glass and doors were cracked or blown out by the force of the water.

Damage is expected to be minimal at the U.S. Cellular Center, four blocks northwest of the Paramount. Nearly six inches of water breached the building, but sandbags reinforced vital areas.

The Cedar Rapids Ice Arena, located on the city’s southwest side, was untouched by floodwaters, but did not escape their consequences. The Cedar Rapids Police Department and units from the Iowa National Guard used the facility as their makeshift headquarters for three days after the Police Station was flooded out. The Police and Guard moved to other locations, but the Streets Department moved in.

“I want to commend our staff for their heroic efforts to save the Paramount Theatre and U.S. Cellular Center,’’ said Scott Schoenike, executive director of all three Cedar Rapids facilities. “The water was so much higher than anyone could have anticipated. The entire city was overwhelmed.

Some of our staff members have no water and/or power but no homes were lost to the flooding. Other staff outside the affected areas have offered their homes to those staff in need.”

Staff members spent all day Wednesday (June 11) placing sandbags around the Paramount Theatre and U.S. Cellular Center. They also moved furniture from the lobby to the balcony at the Paramount and lifted the “Mighty Wurlitzer” organ to its highest point on its mechanized lift in the orchestra pit. Schoenike and Operations Manager Jason Moyer stayed overnight Wednesday at the Paramount, monitoring generators and pumps in the building’s basement. They abandoned their post Thursday at 7:30 a.m. when water overran the generators and the pump could not keep up with the water.

Schoenike’s office is located in the U.S. Cellular Center, a 7,000-seat arena. He is setting up temporary offices today for staff at the Cedar Rapids Ice Arena.

Schoenike has been contacting promoters about events scheduled in the two buildings and will continue to work with them. Events scheduled at the Paramount for the next two weeks have been cancelled. A decision about the BBQ Roundup, now in its 21st year, will be determined later this week.

VenuWorks President, Steve Peters has been monitoring the situation from Rome where he was serving in his IAAM President’s role. Peters will arrive in Cedar Rapids to assess the situation and meet with local staff on Thursday upon his return from Europe. –by CelebrityAccess Staff Writers