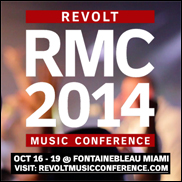 MIAMI (Hypebot) – Revolt TV, Sean Combs' "Multi-Platform TV Network," is holding its first Revolt Music Conference October 16 through 19 in Miami Beach. They've announced more of their speakers and, at this point, it's clearly a gathering of true power players. I was pleasantly surprised to find two major figures from the early rise of hip hop blogging and media sites as well. There will be a lot of history in the room yet RMC looks like it's addressing many of the key issues faced by the music industry as a whole as it looks to the future.

Revolt Music Conference yesterday unveiled a roster of additional speakers and planned panels that rounds out the picture quite nicely.

Folks like Sean Combs, Russell Simmons, L.A. Reid and Bob Pittman are easy to recognize even beyond the music and entertainment industries. But if you go through the list of announced speakers you'll realize that there will be a lot of hip hop history in the room.

Revolt Music Conference is certainly not just about hip hop but when you see many of the names that were instrumental in hip hop's rise from the streets to the boardrooms you know it's potentially something quite special. Some of these people went from being totally shut out to becoming leading industry figures.

Web Upstarts Included In The Mix

Two names that stuck out to me might not be as familiar to Hypebot readers but they were instrumental in the development of hip hop on the web in the previous decade.

Lee "Q" O'Denat is the founder of World Star Hip Hop with which hip hop bloggers had a love/hate relationship in the early days. This was the first site that I ever heard of accused of offering fake video views as a paid service.

Though the design has improved and I don't immediately see the street beatdown videos that I recall being so popular, the winning combination of black music, street culture and eye candy remains. Clearly they've become a more established part of the industry though I have no idea how they're currently regarded beyond O'Denat's appearance at this conference.

But I should point out that World Star Hip Hop took the kind of chances that VCs now seem to encourage when they use the word "naughty" and that they have supported from the early days of YouTube to the current development of apps like Snapchat.

Announced panels will address many topics of interest related to the current landscape.