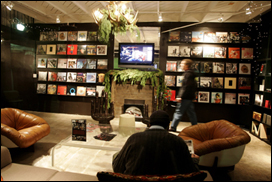 LOS ANGELES (CelebrityAccess MediaWire) — Rhino Entertainment, the acclaimed pop culture imprint, will open a “pop-up” retail store for one month to celebrate the holiday season. The Rhino pop-up store will open for business on Saturday, December 1, at 8032 W. Third Street in Los Angeles, and will close its doors on Monday, December 31.

Located within walking distance of The Grove retail complex, the Rhino pop-up Store will be open seven days a week from noon to 8 PM. From the shop’s grand opening on December 1 to its grand finale 30 days later, the Rhino pop-up store will showcase the quality, value, and serendipitous discovery that has distinguished the label’s releases for nearly three decades.

In many ways the store is an extension of the label's direct-to-consumer Web site at www.rhino.com. The Third Street outlet will offer customers a chance to see and feel limited edition boxed sets, silkscreen posters, fine art photographs, and other merchandise in person rather than rely on the thumbnail images and sound samples that are the currency of the digital domain. E-commerce may be convenient, but shopping at a real record store can be fun. Label employees eager to share their passion for music will man the counters. And to suggest that holiday shopping should be more like visiting a traveling circus than a Darwinian battle for gifts, the Rhino pop-up Store will feature artist appearances, live music, one-off events, and cool giveaways.

“The Rhino pop-up store is a great way for us to connect directly with our consumers and to remind them of all the good reasons to continue to support our local record stores,” says Scott Pascucci, president Rhino Entertainment. “For those of us old enough to remember, Rhino started as a record store—so now we come full circle even if for only one month at the holidays. If you’re in the neighborhood, we hope you will stop by.”

Seasonal shoppers are no strangers to temporary retail sites—though in recent years the Christmas tree lots that would appear for a few weeks starting in November have been joined by a number of bigger brands looking to build buzz with a whirlwind appearance in regional markets. Blitzkrieg boutiques have sprung up in major cities around the globe to sell everything from designer clothing and cosmetics to travel packages and pet care products. –by CelebrityAccess Staff Writers