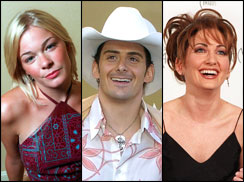 (CelebrityAccess MediaWire) — Three country artists have added their names to the roster of musicians involved in the "Radio: You Hear It Here First" campaign. LeAnn Rimes, Brad Paisley, and Lee Ann Womack released recorded radio advertisements that list a series of accomplishments and milestones in their careers that were only achieved after the artists were discovered on hometown radio. (The spots may be downloaded at: http://www.nab.org/Newsroom/Issues/radio/radiomarketingcampaignspots.asp). The ads are being aired nationwide as part of an unprecedented, industry-wide effort by radio stations to tout the medium's strengths.

"Radio was a huge part of my life growing up," Rimes commented. "It was the first place I heard my favorite artists' new songs."

Womack, Paisley and Rimes join a growing list of recording artists such as Alicia Keys, Ashanti, Avril Lavigne, Hoobastank, Ludacris, and Nelly who have enlisted in "Hear It Here First." Over the course of the next several months, the campaign will continue providing testimonials from artists representing a variety of musical genres. The campaign is also recruiting newly discovered artists to describe radio's role in providing their first big break.

"Country is such an important part of the diverse tapestry of modern American radio," said Bob Richards, program director for WFMS in Indianapolis. "It's exciting to see such big names from the country world step up and describe how local radio connects musicians with their fans."

The "Hear it Here First" campaign is the largest cooperative effort in radio industry history to promote the medium. Originally launched in mid-January, the program will involve a range of media, including print and online. The first stage and cornerstone of the program includes a series of radio spots by well-known recording artists, highlighting radio's importance to musicians. The spots were developed by New York advertising agency DeVito-Verdi.

As part of the program launch, nearly every major radio company including ABC, Beasley, Bonneville, Buckley, Citadel, Clear Channel, Cox, Cumulus, Emmis, Entercom, Greater Media, Infinity, Jefferson Pilot, Journal, Radio One, Regent, and Susquehanna volunteered to air the spots several times per day on their stations during January and February. Following this initial commitment, valued at $28 million, the spots were distributed to every radio station in America for nationwide airing throughout 2005. –Bob Grossweiner and Jane Cohen