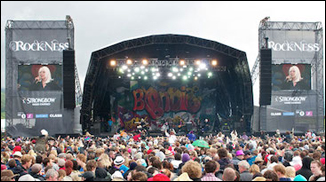 LOCH NESS, Scotland (CelebrityAccess) — The future of Scotland festival RockNess looks uncertain after the organisers have confirmed it has has been cancelled for the second year running.

Global entertainment company AEG, which runs the festival, previously cancelled in 2014, saying RockNess would "take a year off" before returning bigger and better in 2015.

The cancellation has sparked fears for the long-term future of the festival, which is considered a major boost to the Highland economy.

He said: "Certainly it is a big economic blow to Loch Ness and the city of Inverness because it attracted thousands and thousands of people.

"It was a great advert for the area because the location where the festival took place is an absolutely iconic view of this famous stretch of water, so yes, it is a big, big blow."

When organisers cancelled the festival in 2014 they cited major competing events such as the Commonwealth Games and the World Cup.

A festival insider told the Daily Record: "It`s with great sadness that we`ve discovered RockNess will not take place in 2015.

"It`s hoped this isn`t the end of the festival and it will come back bigger and stronger next year but obviously there are concerns.

"There have been some terrific weekends at RockNess and the festival was the biggest of its kind in the Highlands.

"A lot of people will be very disappointed but the rumours had been flying around for years that the festival wasn`t getting the number it needed to thrive.

"Rather than continue to struggle financially and compete for the biggest names with the UK`s other festivals, it seems the organisers have decided to take a step back and regroup."

RockNess has taken place at Clune Farm on the banks of Loch Ness near Inverness since 2006.

Around 30,000 people visited the festival in 2013, which featured performers including Plan B and Basement Jaxx.