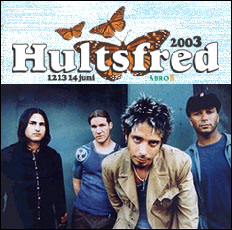 Eleven more acts were announced yesterday (4/3) for this years Hultsfred Festival to take place between 12th – 14th of June.

Audioslave, Looptroop, Buju Banton, Mando Diao, The Datsuns, Grandaddy, Minus 8, Whyte Seeds, Her Majesty, De Stijl and Krigshot were added to the already impressive line up.

A further 80 acts are to be announced before the festival kicks off in June.

The Hultsfred Festival is the largest and longest running youth-oriented music festival in Sweden. It started in 1986 by attracting a 7.000 attendance and has grown constantly since.

The last four years almost 30.000 people payed entrance to the festival each year, which for The Hultsfred Festival means a more or less sold out festival (the maximum limit for 2002 is 30.000 people).

The promoter of the Hultsfred Festival is the non-profit organisation Rockparty, and it's 5.000 volunteers each year. Rockparty is based in the small village of Hultsfred (less than 10.000 inhabitants) all year and has founded a national development- and resource-center for pop-culture in close connection to the festival-office.

Over the years artists from all over the world have shared stages with Swedish up and coming acts. Bands like Black Sabbath, Björk, Nick Cave & the Bad Seeds, Hole, Wu-Tang Clan, Limp Bizkit, The Prodigy, Garbage, Marilyn Manson, Midnight Oil, The Ramones, Suede, Blur, Iggy Pop, Chemical Brothers, Slayer and Motorhead have all headlined the festival.

And acts like Oasis, The Cardigans, The Wannadies, Backyard Babies, Boo Radleys, Lardbyrds, Fatboy Slim, Underworld, Tricky and even the Chemical Brothers all played the festival before hitting the big time…