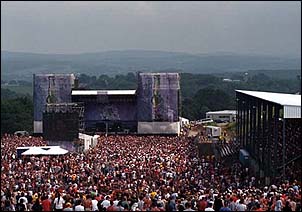 (CelebrityAccess News Service) – The Rolling Rock Town Fair rock music festival will celebrate its fifth anniversary by returning to its original location at the Westmoreland County Fairgrounds in Pennsylvania on July 31, 2004. In addition, regional Town Fairs will be held in Boston, Philadelphia, Minneapolis, Atlanta and Seattle next summer, leading up to the main event in Westmoreland County.

Sponsored by Latrobe Brewing Company's flagship Rolling Rock brand, this year's Town Fair music festival was staged at Heinz Field in Pittsburgh in July, drawing nearly 25,000 fans. It was held at the Westmoreland County Fairgrounds the three previous years. Rolling Rock Town Fair has gained national recognition and become one of the premier single-day music events since it began in 2000. Fans from all over the US and other countries have attended the Rolling Rock Town Fair in years past.

"We are very excited about going back to the fairgrounds," said Jon Genese, director of marketing for Rolling Rock and the new low carbohydrate beer, Rock Green Light. "Town Fair moved to Heinz Field last summer to take advantage of Rolling Rock's position as a founding partner and official beer of the stadium. It's a great venue and we're proud of our ongoing relationship with Heinz Field, but for 2004, we decided to re-live the small town, country fair feel that has made Rolling Rock Town Fair so successful. As a result, we're returning to the fairgrounds to provide our fans with the open-air, festival-style atmosphere and pilgrimage experience they want."

Negotiations for the festival's line-up are currently underway. The five regional Rolling Rock Town Fairs will be staged in outdoor locations utilizing a mobile amphitheatre with a large stage surrounded by a "village" of tents filled with country-fair-style attractions and vendors. Specific dates and venues are currently being negotiated.

"We've learned a lot over the past four years about what makes Town Fair so unique and special for our fans around the country," Genese said. "Next year we'll celebrate Rolling Rock Town Fair's fifth anniversary and its homecoming with a great show that will be our best ever." –Jane Cohen and Bob Grossweiner