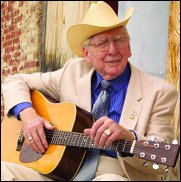 During the program, which will begin at 1:30 p.m. in the Museum’s Ford Theater, Seckler will discuss the highlights of his career with host Kyle Cantrell of Sirius XM Radio, as well as perform several of his signature songs. The program will also feature photographs and video from the Museum’s Frist Library and Archive, and Seckler’s own collection. Following the program, Seckler will sign autographs in the Museum Store.

Curly Seckler was born December 25, 1919, in China Grove, North Carolina. He began performing in his teens, and during the 1930s and 1940s performed with some of the top names in bluegrass music, including Jim & Jesse, Charlie Monroe, the Sauceman Brothers, the Stanley Brothers and Mac Wiseman.

In 1949 he joined Lester Flatt & Earl Scruggs’ Foggy Mountain Boys, and was with them for nearly a dozen years, recording over 130 songs with them including "Salty Dog Blues," "Roll in My Sweet Baby’s Arms,” “I’ll Go Stepping Too,” and “Some Old Day” among others.

During Seckler’s tenure with the Foggy Mountain Boys, they landed a lucrative sponsorship with Martha White Mills, moved to Nashville, became members of the Grand Ole Opry and began a series of highly successful television programs in multiple markets across the Southeast.

Seckler recorded his first solo album in 1971. He joined Lester Flatt's Nashville Grass in 1973, and then took over leadership of the band after Flatt passed away in 1979. Seckler fronted the Nashville Grass for another fifteen years before retiring from full-time touring in 1994.

In 2004, Seckler was inducted into the International Bluegrass Music Association's Hall of Fame. He returned to the limelight with a set of new recordings including Down in Caroline, which was the first piece and a finalist for IBMA Recorded Event of the Year. The second, Bluegrass, Don’t You Know, was picked by the Chicago Tribune as one of the Top Ten Bluegrass CDs of 2006.

At age 90, Seckler continues to perform at selected venues and events, including MerleFest, the IBMA Awards Show and FanFest, IBMM River of Music Party and the Hardly Strictly Bluegrass Festival. He has been featured twice on the PBS television series Song of the Mountains, and was profiled on UNC-TV’s North Carolina People show in 2009. In October of this year, Seckler was inducted into the North Carolina Music Hall of Fame.