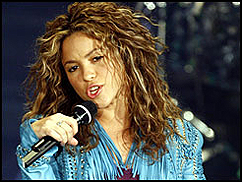 DUBAI (CelebrityAccess MediaWire)–On March 23rd, Dubai came to a stand still – literally – as more than 25,000 fans made their way towards Dubai Autodrome for a sold out concert.

In a city with more construction cranes than anywhere else in the world, and a road system struggling to cope with everyday traffic, the biggest concert the city has seen to date certainly challenged the infrastructure. But the many “Shakira Shakira” cries were drowned out by a gigantic roar from the capacity crowd when Shakira kicked off her concert with a rendition of a song made famous by Lebanese diva, Fairuz.

Shakira's Dubai stop was widely hailed as an success "We believe it could be years before another concert will attract so many people again in Dubai," said Thomas Ovesen, General Manager Mirage Promotions, "and we certainly need better road infrastructure, new purpose build venues or a rerouting of commercial and construction related traffic around concert venues in order to cope with such big concert crowds here in Dubai," he continues.

The all day event at Dubai Autodrome, featuring the first Middle East Shakira concert, coincided with the regional launch of PlayStation 3. From noon guests had access to a variety of concert sponsor brands, like Sony PlayStation, as well as plenty of food and bar outlets, fun fair rides and live music performances.

Nine thousand grand stand seats and a 16,000 capacity standing area erected in front of a massive stage at Dubai Autodrome, which offered Shakira fans a show production similar to that of any other large scale concert arena in the world. On her way to perform in Mumbai, India, Shakira said, "I was overwhelmed by the amazing response from the audience in Dubai. I was so happy to finally be able to perform for my fans in the Middle East. I can't wait to return."