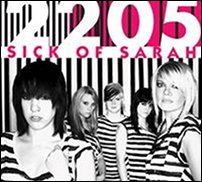 SAN FRANCISCO (Hypebot) – How do you reach 100 million would be fans? If you're Eminem, you star in a couple of Super Bowl ads. If you're Sick of Sarah, you release your album via BitTorrent. Adamant Records, their label, has posted a tutorial on torrents and how they work on their home page.

Last year, BitTorrent started a pilot program that asked artists to let them freely distribute their creative works. At the time, Yes Men and Pioneer One, as well as PAZ, were the only ones to have tried their luck with this service. Josh Bernhard, Writer/Executive Producer, of Pioneer One told Hypebot that from his perspective BitTorrent provided an opportunity to get his stuff seen.

"With 2 million downloads of the Pioneer One pilot within 6 weeks of release, we're getting attention from people interested in advertising to those numbers," he writes. "We couldn't have done this any other way." Sick of Sarah has a similar take. Their fans use BitTorrent. Jamie Holm, the group's bassist, thinks BitTorrent will help them drive new fans to live concerts and purchase their merchandise.

The Minneapolis, MN group has been around since 2005 and gained much acclaim recently, but there's no other way for them to reach an audience of this size. Top 40 radio isn't their game and college radio can only take you so far.

Sick of Sarah's latest album "2205" will be promoted extensively throughout BitTorrent and be available for free download. The hope is that that by distributing their album in this manner they will benefit in the long haul and reach a truly global and diverse audience of music fans and arr music pirates. In the coming weeks, Hypebot will attempt to interview Adamant Records and Sick of Sarah.