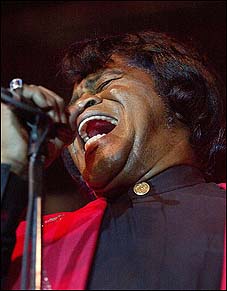 ATLANTA (AP) — James Brown's daughters have filed a federal lawsuit against the Godfather of Soul, seeking more than $1 million in back royalties and damages for 25 songs they say they co-wrote.

Deanna Brown Thomas, who works at a South Carolina radio station, and Dr. Yamma Brown Lumar, a Texas physician, say Brown has withheld royalties because of a family grudge.

Even though they were children when the songs were written — 3 and 6 when "Get Up Offa That Thing" was a hit in 1976 — Brown's daughters helped write them, said their attorney, Gregory Reed.

"This is a sad scenario," Reed said. "They didn't want to handle it this way."

The singer has held a grudge against his daughters since at least 1998, when Thomas had her father committed to a psychiatric hospital to be treated for addiction to painkillers, according to the lawsuit, which alleges breach of contract, negligence and racketeering.

After his release, Brown "vowed to the media that his daughters will never get a dime from him," the lawsuit said. "James Brown has kept his word."

Brown grew up in Augusta and lives across the Savannah River in Beech Island, S.C.

In a letter to Reed almost a year ago, The Atlanta Journal-Constitution reported, Brown's lawyer Leon Friedman agreed that some money was owed to Brown's daughters — about $66,000.

"However, Mr. Brown would be prepared to be more generous to his daughters" and pay them $198,000 "if and only if" they turn over copyrights to the songs, Friedman wrote.

Brown's ex-wife Diedre Jenkins also owns copyrights to the songs. According to the lawsuit, Brown has allowed only Jenkins to receive her share of the royalties.