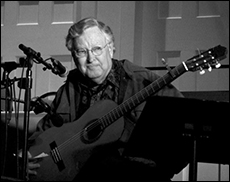 CHRISTIANA, TN (CelebrityAccess) — John D. Loudermilk, a recording artist and prolific songwriter, who penned hits such as "Tobacco Road" and "Abilene," died Wednesday at his home in Christiana, Tenn. He was 82.

News of his death was announced on Facebook by fellow songwriter Bobb Braddock, who says he was a longtime friend of Loudermilk's. The New York Times reported that the cause of death was a heart attack.

Loudermilk, a native of North Carolina, came from a musical family and was a cousin to Ira and Charlie Loudermilk, better known as the Louvin Brothers. He learned the guitar at an early age and wrote his first hit song "A Rose and a Baby Ruth" as a teenager. George Hamilton IV recorded the song in 1956 after hearing Loudermilk perform it on a local television station. Eddie Cochran followed suit, recording Loudermilk's “Sittin’ in the Balcony” a year later.

Loudermilk relocated to Nashville and signed with Acuff-Rose, beginning a particularly prolific phase of his career, writing hits such as “Norman” (1961) for Sue Thompson; “Ebony Eyes” for the Everly Brothers” (1961); and “Abilene” (1963), written with Bob Gibson and others, which would become George Hamilton's biggest hit.

Loudermilk was also known for his abilities as a fabulist with a straight face and once convinced "American Top 40" D.J. Casey Kasem that his hit "Indian Reservation," recorded most famously by Paul Revere & The Raiders, was written at the behest of a Cherokee chief named Bloody Bear Tooth who led him to safety in a blizzard and asked only for a song recounting the tribulations of his people in return. Kasem later repeated the story on his radio program.

"Over the years, I have known him to hold just about every religious and political view imaginable. In conversation, you were never quite sure if he was telling you the most profound thing in the world or pulling your leg," Braddock said of Loudermilk.

Loudermilk also had a brief recording career of his own, recording with Colonial Records (as Ebe Sneezer And His Epidemics), and then as Johnny Dee with Columbia Records and then, more successfully with RCA, where he had hits including "Road Hog," "Language of Love" and "Thou Shalt Not Steal."

Mr. Loudermilk was inducted into the Nashville Songwriters Hall of Fame in 1976 and the North Carolina Music Hall of Fame in 2011. Earlier this year, Loudermilk's career was celebrated in a tribute concert at the Franklin Theater in Nashville. Performers included Bob Braddock, Emmylou Harris, and Rodney Crowell.

Loudermilk is survived by three children, Mike, Rick and John, and by his wife, the former Susan Chollette. – Staff Writers