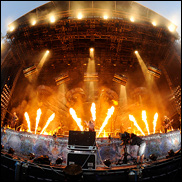 LONDON (VIP NEWS) — Sonisphere Festival, which visited 11 countries across Europe this summer, had a total attendance of more than 700,000 across 19 dates, according to the organizers.

The rock festival benefited from a line-up that included the big four of metal – Metallica, Anthrax, Megadeth and Slayer – on the bill for seven of the dates. A further 100,000-plus rock fans attended a global cinecast of the four bands performing at Sonisphere in Sofia, Bulgaria.

This year the festival has been hit by mud baths in Switzerland and Sweden, a sandstorm in Spain and a freak tornado at the finale in Finland.
A 50-year-old man was injured at the festival in Finland and later died.

"We are obviously shocked and devastated and would like to offer our most sincere condolences to the family and friends of the victim," said Stuart Galbraith, series producer for Sonisphere Festival, in a statement.

Iron Maiden played three dates at Sonisphere 2010, including their only U.K. appearance of the year. Their presence as headliners ensured the Aug. 1 U.K. leg at Knebworth sold all 55,000 tickets.

At last year's inaugural Sonisphere, around 300,000 fans attended the festival, which was staged on seven dates at six locations.

"Sonisphere is here for the long haul and in five or 10 years from now it will be as established a name as Werchter or Glastonbury or Pinkpop," said Lars Ulrich of Metallica in a statement.