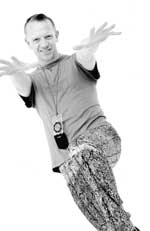 Afrikaans singer Ralph Rabie aka Johannes Kerkorrel, regarded as the Bob Dylan of South African music, was found dead November 12, hanging from a tree at his vacation home, outside Cape Town.

Boland police spokesperson William Reid said, "We do not suspect foul play. The circumstances surrounding Kerkorrel's death will not be released until a full investigation and post mortem have been completed," reports Cape Times.

According to News24, a will and three suicide notes were left behind.