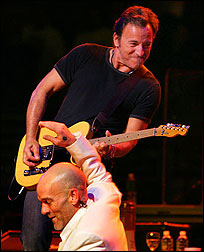 (CelebrityAccess MediaWire) — Bruce Springsteen and the E Street Band will perform a single New Jersey concert for Vote For Change on October 13. Jackson Browne, John Fogerty and Patti Scialfa are also on the bill. Springsteen's manager Jon Landau said, "The Vote For Change experience has been so wonderful that we couldn't let it end without taking it to New Jersey. The Meadowlands is going to be shaking."

The concert is being produced by MoveOnPAC to benefit America Coming Together. The Vote For Change tour kicked off in Pennsylvania on October 1, and will include twelve states with the addition of the New Jersey show. Vote For Change artists were brought together by a single idea – the need to make a change in the direction of our country at the federal, state and local levels. The artist coalition includes Ben Harper and the Innocent Criminals, Bonnie Raitt, Bright Eyes, Bruce Springsteen and the E Street Band, Dave Matthews Band, Death Cab For Cutie, Dixie Chicks, Jackson Browne, James Taylor, John Fogerty, John Mellencamp, Jurassic 5, Keb' Mo', Kenny "Babyface" Edmonds, Pearl Jam, R.E.M., and My Morning Jacket. <./P>

Ticket prices are $100-$75 plus additional service fees. There is a six ticket limit for each transaction. –Bob Grossweiner and Jane Cohen