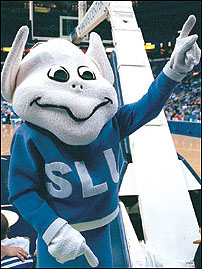 St. Louis University has decided to build an 12,000-13,000 capacity, $80 million-plus arena near its campus that would be more than just a new home for Billikens basketball and other student-related events. With a flexible floor plan, the new arena would compete with Savvis Center downtown, where the Billikens play now, which has half as many seats.

"We will be able to accommodate just about anything that goes to Savvis now, except that we won't have permanent ice," Kathleen Brady, the university's vice president for facilities and civic affairs, told the St. Louis Post Dispatch. The new area will also be home to concerts, family and trade shows and other community events.

"This will be a major venue in the St. Louis community that will primarily serve SLU's needs, but it will also be used by other groups that want to sponsor music or entertainment events," said former Mayor Vincent C. Schoemehl, Jr.