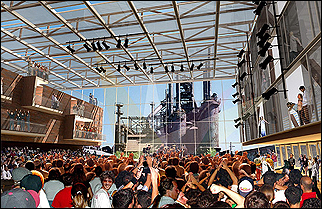 BETHLEHEM, PA (CelebrityAccess MediaWire) — The much-hyped SteelStax cultural complex, which was to include the highly anticipated Festival Hall among the giant abandoned steel structures, has been scrapped because Sands BethWorks is now planning to build its own concert venue near its new slots casino.

The planned $50 million SteelStax project has been dwarfed by the $600 million casino project. Sands BethWorks has plans for a 50,000-square-foot multipurpose events center, which will hold concert audiences up to 3,700. The new arena will sit just a few hundred yards from where ArtsQuest President Jeff Parks had planned to build Festival Hall.

Parks isn’t complaining about the sudden change in plans for his lofty vision.

“You kidding me? They’re saving me $50 million,” He joked to the Allentown Morning Call. “The Valley needs a major concert venue, so we figured we’d take a stab at it, but only because no one else was stepping up. Well, now someone is.”

ArtsQuest, a Bethlehem nonprofit that runs Musikfest, Christkindlmarkt and the Banana Factory, is in the middle of a $49 million capital campaign to build a separate, smaller performing arts center and a PBS studio as part of the casino development. The performing arts center, a 450-capacity venue called Musikfest Café, will be a major attraction in the casino development.

Festival Hall was to be a 3,500-seat concert hall with large glass walls that overlooked the aging steel blast furnaces that had been shut down in the Lehigh Valley. –by CelebrityAccess Staff Writers