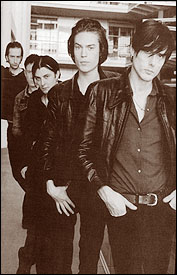 SUEDE has revealed their intention to perform at this summer's festivals, by announcing a date at Denmark's SMUKFEST event.

The group have just returned to the studio to complete work on their new album, given a joke working title of 'Subject To Nicotine Stains', assisted by Smiths producer Stephen Street.

Now, the band will play at the Danish festival, which takes place over the weekend of August 8-12. It is understood that Suede will perform on August 10.

Their appearance fuels rumours of UK live shows later in the year. However, a UK spokesperson for the group is currently unable to comment.