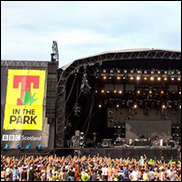 PERTHSHIRE, Scotland (VIP NEWS) — T In The Park organizers have been slammed in a report after the 2015 festival attracted the highest number of complaints in the event`s history.


The festival, which had been held at Balado since 1997, moved to the grounds of the 19th century castle near Auchterader last year, but the edition was marred by traffic congestion, crowd safety and security concerns. There were also complaints about disruption to the local community, including anti-social behavior.


Promoter DF Concerts said it was "incredibly disappointed" to fall short of its usual standards and has pledged to implement key changes this year. Last week it announced a series of management appointments as part of a restructure of the festival’s operational team.


The report by Perth and Kinross Council said "confidence has been undermined" following DF`s management of the 2015 festival. "Officers had a high degree of confidence in DF Concerts, and expected that organizers could manage fundamental event requirements such as stewarding and signage," said the council`s environment service director Barbara Renton. "This confidence has been undermined following DF Concerts’ management of TITP 2015.


"There requires to be a recalibration of the relationship with DF Concerts, and an upscaling of monitoring to ensure the failings of 2015 are not repeated, should DF Concerts consider holding TITP at Strathallan in future.


"Event plans will have to be provided much more responsively, and concluded far earlier than happened for TITP 2015. It will also be necessary to explicitly re-emphasize to organizers that their failure to provide comprehensive plans timeously, and meet planning conditions, will create a risk that the event will not be allowed to proceed."


"We have worked with Perth and Kinross Council for the last 20 years to deliver T in the Park," said DF Concerts in a statement. "We’re incredibly disappointed that, for the first time, we did not achieve the high standards of event management and customer service that we have set for ourselves which the council and our customers have, quite rightly, come to expect. We note all points of Perth and Kinross Council’s report as published and remain focused on implementing key changes for 2016. We will not be disappointing ourselves, Perth & Kinross Council, the local community and especially our fans in 2016 and in truth, we look forward to being able to demonstrate that. –According to MusicWeek