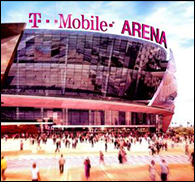 LAS VEGAS (CelebrityAccess) — Telecom giant T-Mobile has signed on as the naming rights sponsor for the new arena under development by a joint venture between AEG Live and MGM Resorts International.

The multi-year naming rights agreement was negotiated by AEG Global Partnerships and will see the new venue officially named as the T-Mobile Arena. Financial terms of the agreement were not disclosed.

“We’re going to light up Las Vegas in magenta and give everyone who visits T-Mobile Arena a chance to experience what it means to be Un-carrier!” said Mike Sievert, chief operating officer of T-Mobile. “T-Mobile Arena will have the biggest shows in a town known for big shows and T-Mobile customers will always be treated like VIPs with priority access and exclusive benefits.”

AEG Global Partnerships is also overseeing sales of the new arena's VIP suites and club seating with all 42 of T-Mobile Arena’s Luxury Suites have been snapped up, with a limited selection of Opera Boxes, Club Seats and private Bunker Suites still on offer.

The 20,000 seat venue, located west of the Las Vegas Strip between New York-New York and Monte Carlo, is expected to host more than 100 events annually, including UFC, boxing, hockey, basketball and other sporting events, major headline entertainment, awards shows, family shows and special events and is slated to open in April, 2016.