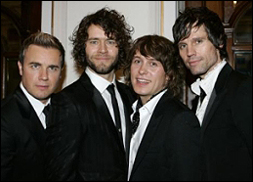 MANCHESTER, UK (VIP-NEWS) — The Manchester four-piece are set to play eight dates in June 2009 taking in venues in Sunderland, Cardiff, Manchester and London.

The band made the announcement on Chris Moyles' Radio 1 breakfast show and tickets for the Circus tour go on sale at 0900 BST on 31 October.

The group's new single Greatest Day is set to be released on 24 November with the album to follow on 1 December.

Lead singer Gary Barlow revealed that the track was written by the whole band and said it would be a perfect opener for their forthcoming tour.

It was written and recorded at SARM studios in Notting Hill before it was mixed in Los Angeles at the Jim Henson Studios.

Take That will round their tour off with three dates at Manchester's Old Trafford Cricket Ground on 26, 27 and 28 June before they finish at Wembley Stadium on 3-4 July.

In a statement the band said: "All of us are really looking forward to getting back on the road next summer.

"We can think of no better way to thank everyone for their support and loyalty over the past three years.

"This will be the biggest tour we have ever done so we'll be working especially hard over the next few months to make it the best and most exciting Take That tour yet."