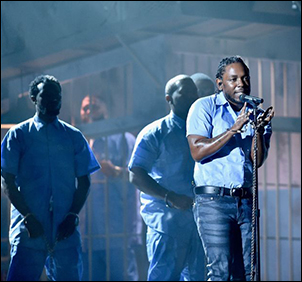 While accepting the award for Best Album, Swift took the opportunity to take a dig at her nemesis Kanye West.

“As the first woman to win album of the year at the Grammys twice, I want to say to all the young women out there: There are going to be people along the way who will try to undercut your success or take credit for your accomplishments or your fame, but if you just focus on the work and you don’t let those people sidetrack you, someday when you get where you are going, you’ll look around and you will know that it was you and the people who love you who put you there and that will be the greatest feeling in the world,” Swift said.

In the performances, Adele failed to impress, battling what broadcaster CBS later admitted were audio issues, though, Adele managed the unfortunate situation with her customary grace.

Justin Bieber followed his first Grammy win for best dance recording with an acoustic solo performance of “Love Yourself” before tossing his guitar aside to join Diplo and Skrillex for a rendition of "Where Are U Now," which brought down the house.

Kendrick Lamar’s performance of “The Blacker the Berry” was also a fiery show-stopper, with Lamar, fresh off of five Grammy wins, appearing on stage in shackles to perform the hit.

Don Henley, Bernie Leadon, Timothy B. Schmit, and Joe Walsh were joined by Jackson Browne to pay tribute to their late bandmate and Eagles co-founder Glenn Frey, while Bonnie Raitt, Chris Stapleton and Gary Clark Jr. joined in a tribute to the late B.B. King, performing King’s seminal hit “The Thrill is Gone.”

Motorhead founder Lemmy Kilmister was also honored with a performance by Hollywood Vampires, a band featuring Alice Cooper, Aerosmith's Joe Perry, and Johnny Depp. They were joined by Duff McKagan on bass and and Matt Sorum on drums.’

"Lemmy Kilmister was rock 'n' roll. He was a rebel and an outsider," said Dave Grohl as he introduced the Vampires.

Celia Cruz, widely regarded as the Queen of Latin Music, was honored with a Lifetime Achievement Award.

The 58th annual Grammy Awards were hosted by L.L. Cool J and took place at the Staples Center in downtown Los Angeles.


Song of the Year – Ed Sheeran, "Thinking Out Loud"


Best Urban Contemporary Album – The Weeknd, Beauty Behind the Madness


Best Dance Recording – Skrillex and Diplo With Justin Bieber, "Where Are Ü Now"


Best Contemporary Christian Music Album – Tobymac, This Is Not a Test


Best Album Notes – Joni Mitchell, Love Has Many Faces – A Quartet, A Ballet, Waiting To Be Danced


Best Arrangement, Instruments and Vocals – Maria Schneider, "Sue (Or In A Season Of Crime)"