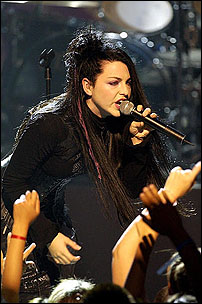 (CelebrityAccess News Service) – The 46th Annual Grammy Awards race could be a rock n' roll sweep, according to a

new national Harris Interactive survey of teens. This year's results reveal teens' preference for rock music over other music genres, as teens endorse Evanescence and Coldplay for top honors. Their endorsement of rapper Eminem and his nominated song, "Lose Yourself," a rock-influenced tune that includes guitars, drums and piano, also displays this preference — more than a third of teens (35%) voted it "Song of the Year."

The Harris Interactive YouthQuery Omnibus of 642 American teens, ages 13-18, was conducted online from January 14-19. The poll covered the four most popular GRAMMY categories and gave teens an opportunity to pick their favorites. Results include:

Within the four categories considered, the survey showed that teens' votes were split between several R&B and hip-hop artists, preventing any one of those artists from winning top honors. If Grammy voters end up following a similar pattern, then R&B and hip-hop artists, such as The Black Eyed Peas, Justin Timberlake, Outkast, and 50 Cent, will be left wondering, "Where is the love?" echoing the sentiment in the song made popular by the Black Eyed Peas and Justin Timberlake.

"It will be interesting to see if Grammy voters reflect teens' current views toward rock music," states Marc Scheer Ph.D., senior research associate, youth research at Harris Interactive. "This is an industry that looks at young people as trendsetters, and, for this year at least, rock and roll is not dead among teenagers."

This year's Grammy nominees are quite different from last year's. No country music artists have been nominated in the four top voting categories this year. In addition, last year's top Grammy categories included nominees, such as Bruce Springsteen and Alan Jackson, who addressed serious world themes. This year, however, pop music and matters of the heart are center-stage once again.

"Although the Grammy awards are voted on by music industry insiders, this survey can be considered the "bubble gum" vote, a snapshot of teen music preferences that could translate into billions of dollars in music sales," concludes Scheer. –Bob Grossweiner and Jane Cohen