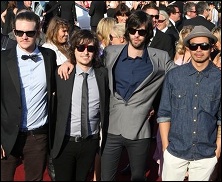 NEW YORK (CelebrityAccess MediaWire) — After performing at both this year's Coachella and Bonnaroo festivals, Melbourne's finest export, The Temper Trap, will return to the States to play Lollapalooza and Outside Lands festivals along with a run of shows that will take them west.

This fall, the band will also headline a North American tour including their biggest show to date and Austin City Limits Festival.

Their song, "Sweet Disposition," recently won the prestigious award for "Song of the Year" at 2010 Australasian Performing Right Association (APRA) Awards. The track was featured in the hit indie film 500 Days of Summer.