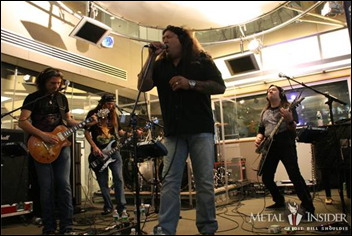 NEW YORK (CelebrityAccess MediaWire) — After conquering Europe all summer long on tour, including highlights such as performing to 80,000+ rabid fans at the 20th Anniversary of Wacken, culminating over 189 shows on their World Tour… Testament made a stop in New York City for a special taping of Sirius XM’s Artist Confidential series. Artist Confidential is a series honoring the most important and timeless artists in music, The Icons, The legends, The Artists who are without question the innovators who make their indelible mark.

Testament were invited into Sirius/XM’s NYC studios to sit down for candid interviews, intimate conversations with fans + an electric live performance combing early Testament classics as well as 2 new tracks from their award winning , Golden God Album of the Year 2008 release – “The Formation Of Damnation” (Nuclear Blast) .

In between songs, the band fielded questions from show host Lou Brutus. Testament spoke candidly about filming of their early videos, special memories of being on the road, the band’s history, the reformation of the original line up of the band, and the recording of their new “Golden Gods” Award Winning Record, “The Formation of Damnation.”