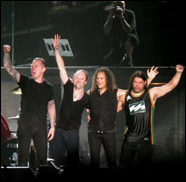 LONDON (VIP NEWS) – The 'Big Four', Metallica, Slayer, Megadeth and Anthrax, sharing a stage for the very first time, are bringing their historic European tour to 79 UK cinemas via satellite in a special HD cinematic event.

These four legendary acts broke out of the underground thrash movement in the 1980’s to dominate the metal world, selling millions of records and packing arenas across the globe. Despite huge demand, these musical giants have never shared the same stage until now.

The legendary June 22nd concert from the tour’s stop of the Sonisphere Festival in Sofia, Bulgaria will air the same day in 79 movie theaters in the U.K., over 450 theaters in over 140 markets in the U.S., and as well as being beamed into theaters in Europe, Canada and Latin America. Delayed screenings are planned in Australia, South Africa and New Zealand.

In December 2009, the bands announced that they would be joining forces to take part in the traveling Sonisphere Festival for only 7 shows across Europe. Now, this one-time only event from the Sofia show makes it possible for fans far and wide to participate in what otherwise is a very limited run of dates. The high-definition concert presentation will memorialize the event and the impact will be amplified globally with the cinema screenings, making the dreams of fans around the world over become a reality.

Lars Ulrich of Metallica says of this historic announcement, "Who would have thought that more than 25 years after its inception, thrash metal's Big Four would not only still be around, be more popular than ever, playing shows together at stadiums all over Europe, and on top of that, coming to a movie theater near you in High Definition (for better or worse??!!). Bring it on!"

Anthrax guitarist Scott Ian says 'Damn, as if this Big 4 tour wasn't exciting enough now we get to be on the big screen worldwide! Metal at the movies, two big horns up! It is unbelievably gratifying that this means so much to the metal community around the globe. Get your tix, grab some popcorn and get ready to bang your head!'

Declares Slayer’s Kerry King, 'I can’t believe someone didn’t make this happen 15 years ago! The fans finally get what they want. I think it’s awesome!'

Says Megadeth’s Dave Mustaine, 'The magnitude of this event hasn't really sunk in yet, and I am thrilled to know that people around the planet will be able to walk into a movie theater and experience the greatest line up of Heavy Metal in the history of the world!'