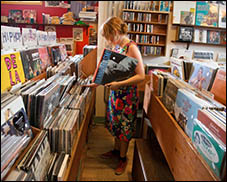 (Hypebot) – While there's no question that, when it comes to recorded music, the world of retail isn't what it was, it isn't all doom and gloom. Here we look at how selling music has changed, and the state of the music retail industry today.

Guest Post by Ben Liemer, National Sales Director/Physical of The Orchard from The Daily Rind

You’ve heard it before: the only constant in life is change. Adapt and survive. Darwinian selection has always been an active force in the music business since the beginning. And those of us who live in NYC and work at The Orchard, see it every day. “The Force” has to be strong if you’re going to make it here. Just ask late blooming soul singer Charles Bradley or cancer survivor Sharon Jones, now hotter than ever since her Lincoln car commercial featuring “Midnight Rider.”

Yes, we’ve heard the news. In 2015 streaming doubled, and even the fact that booming niche vinyl sales now account for more profit than all YouTube music revenue combined may not save the music business as we currently know it. Downloads have fallen for 3 straight years and CD sales peaked way back in 2001.

And yet Rough Trade opened a massive new physical store in Williamsburg in 2013. And this month, New England’sNewbury Comics is finally dipping its toes in the chilly waters of NYC area retail, with a Grand Opening of their 27th store in the Roosevelt Field Mall in Garden City, Long Island on August 27th. The music retail landscape, both physical and digital, is changing before our eyes. Tower Records shut its doors in 2006, the last Virgin Megastore closed up shop in 2009, the quirky and gruff NYC punk era survivor Bleecker Bob‘s in 2013. Media outlets like the NY Times, Pitchfork, Brooklyn Vegan and Stereogum celebrated and mourned the loss of Other Music and Rebel Rebel at the end of June.

These two taste-defining Greenwich Village institutions had runs of 20 and 30 years, during which they championed the likes of The Strokes, Yeah Yeah Yeahs, Interpol, Vampire Weekend, Dum Dum Girls and other local acts to national prominence. Ultimately, these still profitable indie businesses called it quits over massive rent increases with Other Music paying over $12k/month and property on the west strip of Bleecker Street where Rebel ruled now valued at $25k/month for $500 sq. feet. Virgin and Other Music went out with big, splashy events and Other Music’s farewell concert with Yo La Tengo, Sharon Van Etten, Yoko Ono, and others may yet end up as a release on their still active record label in the future.

Around the country, where rents are lower, the classic records shops like Waterloo Records in Austin continue to service their loyal, devoted, highly active and engaged fan base. More vinyl-only shops have opened from Chicago to Brooklyn — the question now is, has the retro chic vinyl craze peaked too? Time will tell even as more vinyl pressing plants are finally coming online after years of existing plants running at 24/7 capacity.

Meanwhile, I’ve been selling and marketing to Amazon for over a decade now. Like you, I buy everything from sneakers to camping equipment to vitamins there. Today, it’s a massive, impersonal but efficient price-competitive consumer marketplace that delivers the goods to your door or office front desk. Will it be the last bastion of physical CD and vinyl sales? There’s hundreds of idiosyncratic, highly personal, entrepreneurial physical retailers from Chi-town’s 606 Records to Oxford, MS’s The End of All Music to New Jersey’s Vintage Vinyl to Portland, Oregon’s Music Millennium that would beg to differ.

In the end, the music business is about personal relationships and making things happen. The owners of Other Music, Rebel Rebel and the still thriving retailers above all share the same passion for music and life-affirming, creative force that led Richard Gottehrer to co-found The Orchard almost two decades ago. The same passion and creativity that will drive the new distribution methodologies and platforms of our future — one click and it’s on its way. It’s just that the retail marketplace of the future may be a little less personal, a little less mano a mano, that’s all.