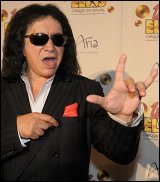 NEW YORK (CelebrityAccess) — While KISS frontman Gene Simmons has been a popular guest on Fox News and Fox Business Network programs in recent years thanks to his celebrity and conservative views, he was reportedly barred from the property on Wednesday after a series of awkward incidents at the Fox studios.

According to the Daily Beast, Simmons made offensive comments to female Fox employees during a staff meeting after he appeared on Fox Business Network’s Mornings With Maria, with host Maria Bartiromo.

Following the incident, Simmons photo was posted at the building's security entrance along with a 'do-not-admit' advisory, the Daily Beast reported.

During Simmons' appearance on Mornings With Maria, he joined a seemingly surprised meteorologist Janice Dean for an impromptu weather report and joined in a panel discussion where he opined about the Harvey Weinstein's alleged sexual misconduct.

“The lunatics have taken over the insane asylum when respected business entities such as yourself ask guys that like to stick their tongues out,” Simmons told the panel, “what I think of Harvey Weinstein.”

“Okay, I’m a powerful and attractive man, and what I’m about to say is deadly serious,” he added. “Men are jackasses. From the time we’re young we have testosterone. I’m not validating it or defending it.”