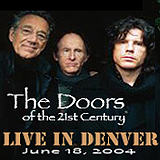 (CelebrityAccess MediaWire) — Immediatek, Inc. creator of NetBurn Secure digital delivery and copy control solutions, and parent company of DiscLive, Inc., offered for the first-time ever in the U.S., NetBurn digital downloads of an evening with The Doors of the 21st Century. The performance was recorded live from the Universal Lending Pavilion at the Pepsi Center in Denver, CO on June 18. Exclusive access to NetBurn downloads of the entire concert are available at the DiscLive website for $20, and the consumers could create their own concert CDs just a few hours after the concert's conclusion.

"The band is excited to be at the forefront of the technological advancements in live music distribution being pioneered by NetBurn and DiscLive," said Tom Vitorino, manager of The Doors of the 21st Century.

Stephen Prendergast, senior vice president and general manager of DiscLive's West Coast office added, "The NetBurn concept allows a concertgoer to leave the show, order the performance over the Internet and then enjoy the concert again as they drive to work the next morning. There is no waiting. The convenience, easy access and immediacy is what music fans appreciate."

According to Zach Bair, founder, CEO and chairman of Immediatek, DiscLive has successfully tested the NetBurn implementation with a string of concerts with the Pixies on their recent stint at the Brixton Academy in London, where fans were able to create their own NetBurn CDs within a few hours after the concert anywhere in the world. The Doors of the 21st Century concert represented the first time the technology was used in a live concert environment in the United States.

"Each fan will receive an access code that will enable them to download and burn that night's concert at their home computer over the Internet from anywhere in the world," said Bair. "This is a landmark event for the industry, as this is the first time a concert will be recorded and made available only through NetBurn — and so quickly after a show."

Bair, who is also a recording artist and musician with his band No Control, noted that the music industry needs new revenue opportunities. "Everyone in music, from the bands, agents, managers and promoters, to the labels and publishers, are looking for new and creative ways to inject life into what has been a very difficult market for the last several years," said Bair. "We believe that our groundbreaking combination of exciting services will become vastly popular in the near term, and it will open the door for more and more creative services to arrive. We're very excited to have the Doors of the 21st Century be one of the first on board with live NetBurns!" –Bob Gossweiner and Jane Cohen