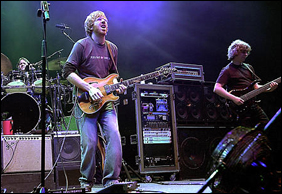 NEW YORK (CelebrityAccess MediaWire) — The Jammy Awards will return to The Theater at Madison Square Garden on May 7, 2007. This year’s ceremony and all-star concert will mark the seventh installment of the The Jammys, and will feature a special Lifetime Achievement Award presentation to jamband giant, Phish.

Produced by Relix Magazine, Jambands.com, and Peter Shapiro, The Jammys has become one of New York City’s premiere events and one of the top grassroots music events in the world.

The performers for this year’s concert, as well as this year’s award nominees will be announced in the coming weeks.

One of the most popular American bands in rock history, Phish inspired new generations of musicians eager to put their own stamp on improvisational music. Like the Grateful Dead, Phish crisscrossed its way across the U.S. and world during their 20-year career, routinely selling out tour after tour, before disbanding in 2004. Previous Jammys
Lifetime Achievement Award winners include B.B. King, The Meters, The Grateful Dead, Buddy Guy, Steve Winwood and Frank Zappa.

"We are extremely proud to present our Lifetime Achievement Award to Phish," says Jammys Executive Producer and Co-Creator Peter Shapiro. "Few bands have meant as much to the improvisational music community as they have, so celebrating their career is something that is a natural thing for us to do."

Critically acclaimed for creating collaborations between the likes of John Mayer and Buddy Guy, Ryan Adams and Phil Lesh, Sinead O’Connor and Burning Spear, Béla Fleck & the Flecktones with McCoy Tyner and Savion Glover, Travis Tritt and the Disco Biscuits, and Peter Frampton and Guster, The Jammys was founded as an alternative to mainstream award shows. The Jammys is a celebration of the best in live
improvisational music performance that pairs the brightest lights on the jam music scene with stars from the pop, rock, reggae, gospel and jazz realms.