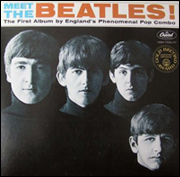 When I was a little boy, I was infatuated with the British Invasion.
"Meet The Beatles" wasn't the first album I bought, but when "I Want To Hold Your Hand" hit the radio in January of '64, my listening looked to the U.K., I needed to hear the Merseybeat, emanating from my

leather-clad transistor. But the jangly sound of the skinny white boys from across the pond was not the only music that poured out of the radio. There were a few novelty hits, a few holdovers from the

early sixties, even some girl groups, like the Shangri-Las, and a bunch of Motown music. I won't say I switched the station when a Berry Gordy record came over the airwaves, like I would when I heard Louis

Armstrong's "Hello Dolly", but although I was intrigued by "Where Did Our Love Go" and absolutely loved "Come See About Me", I didn't get the same rush from soul music until I heard Aretha Franklin's

"Respect" didn't come from the Motor City, but somewhere further south. It had elements of Memphis soul, there was a certain swing, a certain sexuality, not encased in the lyrics, but the music, and on top

of it all was this woman singing like her story was the most important in the world! Sure, the horns made me nod my head, but when this woman suddenly started spelling the name of the song, my back

straightened up and I paid attention! It was like being in school, but this was a life lesson, one I needed to pay attention to, one truly important.

Last night I went to the MusiCares dinner. You can do a year's worth of business in one evening. You talk to old buddies, heavyweights, get introduced to rock stars. I'm shaking the hand of this guy Ted

Cohen is talking to telling myself this must be Dave Stewart. And then Don Passman introduces me again, and says the musician's name.
I'm talking Mac with Roger Ames, Seymour Stein is at my table, he introduces me to the founder of the Montreux Jazz Festival. And as we're eating our rubber chicken, the lights dim, and luminaries ranging

from Reverend Al Sharpton to Quincy Jones testify to the greatness of the honoree, Aretha Franklin.

And these gigs are always the same. You listen to some famous people butcher the hits of the star. You tap your toe, go to the bathroom, speak to more business executives, the time passes. But you stay

til the end, when the big kahuna finally takes the stage.

Neil Portnow read from the TelePrompter. Then he introduced Aretha.
Who just couldn't make it to the stage. I'm in the very front row, I've got a clear line of sight. She's stuck at the stairs. Didn't "Parade" or some Sunday supplement say she lost weight? Was she ill?
Was she gonna make it? Then it was clear, she was stymied by her dress! Skin tight, with plumage at either end. She ultimately joked how she had trouble getting into the car at the hotel. Ah, the things

we do for art, for showbiz.

Then Aretha takes the mic. And starts to talk. But this is unlike any previous speech of the evening. She's conversational, it's like you're at a church meeting, planning an event, reviewing an event

which already happened. She's got no stage fright, she's adopting no airs. She's pointing out people in attendance, household names and those known only to her. And when she's done telling us it took her

six days to drive out here but she's gonna fly home, she seems to start backing out of performing! And that's the only reason I'm staying! She used her voice too much already, she's worn out. But then she

says she's gonna give it a try.

She shuffle/hops in her dress to the center of the stage, looks back at her band, and suddenly, just moments after you hear that introduction that's burned into your DNA, Aretha looks to the sky and

I've seen everybody from Beatles to Stones. Flavors of the moment to legends. I've never had a more electric moment. This go through the motions charity event has suddenly been elevated to a religious

experience. Aretha has instantly taken us to higher ground!

And the way she does it. She doesn't boast like a modern day rapper.
She just stands there and sings, winning you over with her incredible talent!

She knows how great she is. She has a hard time repressing her smile. And in the audience, it's like Oprah's giving away Pontiacs, heads are exploding!

I won't go to a disco. Put on a record and I'll sit in my chair. But I cannot help but get up and dance.

Isn't she 68? Shouldn't she have lost something? A step, her voice?
Shouldn't we just be applauding the legend? But no, it's 1967 all over again, we're right back there, when the Queen of Soul reigned over the chart.

I'm thinking she has lost weight. I'm thinking she's not classically beautiful. But I'm in thrall to her magnetism. I'm putty in her hands. She ultimately segues into a religious number, but "Chain Of

Fools" was gospel enough for me, I'm a believer!

Every chain has got a weak link. The record companies are worried about file-trading. Managers worry there are no slots on radio. Even Justin Timberlake laments there are no videos on MTV. But music,

music's doing just fine. Talent has not dried up. And when confronted with it, the public can't get enough, people will cough up all their money. Aretha Franklin was undeniable!