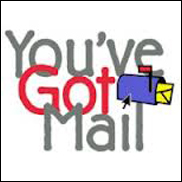 
Because it comes late. We live in a Gmail world. Unless your business or educational institution provides e-mail, switch to Gmail, for the storage, for the usability, for the cutting edge updates. Kind of like buying an HP printer. Sure, an Epson or a Canon might be as good, but will they update the drivers to work with the new operating system right away? Doubtful.


The only things we want in real time are sports and awards shows. We might be interested in what you have to say, but we don't want to dedicate an hour at the appointed time to find out.


We're entering an era of authority. In other words, you can write online but unless we already know who you are, we're not going to read it. Yes, if you write something better than the usual suspects, with greater insight and equal readability, you might go viral, otherwise, save your time and post photos to Pinterest, because hobbies are personal.


Buy your smartphone today. That's right, if you don't have one you've got about a three month window until all your friends start making fun of you. You might think you don't need one, but the truth is we all live on apps and believe you've got maps in your pocket.


They're on most blogs and YouTube too but no one reads them. They give you the illusion your voice counts, but the truth is it doesn't.


Fads. They're the essence of the internet. No different from PSY and Rebecca Black. Like one hit wonders, you get your money out fast and then move on. But the public is stupid and invests when these companies go public.

With no physical product there are no limits. We want as much good stuff as you can deliver. Think about how you can deliver it differently. Don't focus on one time events, but constant ones.


No one wants to pay, they'd rather just hand over their data. We expect it to be free. If your business model is dependent upon people paying, reevaluate.

ON THE WAY OUT


Because BuzzFeed does linkbait so much better.


Oh, we'll all be employing wearable computers, but will they be geeky glasses we can all see? Doubtful.


Too much horsepower and limited mobility. For most people, their handset is enough. We live in a mobile era and now everybody knows it.


We hate it. We can see through it. But if we see the same story enough, we know someone is behind it and it's worth paying attention to.


The faster the connection, the better the economy. It's why Spotify started in Sweden and so many companies began where there was screamingly fast bandwidth. There was no Netflix before broadband. There will be no CD quality music without faster delivery. This is a national issue. Lobby your government and pay your taxes, it's for the good of us all.


Kansas wants to eviscerate funding for public schools so fat cats can get richer with lower taxes. This is an under-covered story. How the right wing religious zealots and their rich Republican compatriots are undercutting public education. As for college… You can pay for it, but it's nothing more than an entry ticket unless you go to an elite institution that teaches you how to think. That publicity degree, that music business degree, it might get you in the door but it won't ensure a long term career. Whereas if you know how to analyze a problem you're prepared for change, and change is constant, now more than ever.


Do we need a separate unit? As smartphone cameras get better, the need for anything else declines. Only hobbyists need a DSLR.


It will continue, but it's already passe. Let me see, I want to invest a ton of money so someone can create something I think I want but find out I don't really. Don't expect Amanda Palmer's next album to be funded by Kickstarter, she's smart enough to move on to the next thing. That's her skill, discovering what's hip and using it to connect with her fans. You definitely want to know who your fans are and connect with them on a regular basis, but please don't expect the rest of us to care.


Is there a new new thing? Doubtful. Right now the story is…storytelling. That's what TV does so well. If you can tell a story, the world is yours.

The iPad killed e-books, or at least stalled their progress. Everyone
got excited about e-readers and purchased them and bought books, we were in a heyday of reading. But then the iPad came out with additional capabilities, the Kindle Fire followed and e-books stalled. Luddites and publishers believe this is good for them, that it keeps brick and mortar bookstores and physical books in circulation. But that denies the number one rule of consumerism, distribution. Not everybody lives near a bookstore, printing and distributing books is expensive and wasteful. When everybody was buying Kindles and books publishing was getting a shot in the arm, reading was suddenly where it was at. Now all that's stalled, to the detriment of publishers and writers, they just don't know it yet. He how sits self-satisfied on the old ways loses out. Just like those who focus on CDs lose out. You can reach so many more people online. Figure out how to convert them and make money. Everybody knows about Beyonce's new album. They could know about you too, if you just got your head out of your rear end. No, that's not true. They want to know about a very thin layer of popular titles, and most people can't deliver them.


Major labels will continue to sign fewer artists and focus their efforts upon them. You can sign with an indie, you can put it out yourself, just don't expect anybody to pay attention.


Which failed to realize entertainment comes secondary to pith. Looking for spicy stories "60 Minutes" sacrificed its credibility and will not be taken seriously again. At least the "New York Times" fell on its sword after the Judith Miller affair. But "60 Minutes" can't do this, because it would require them to spend money where no one can see it, behind the scenes, and TV news is all about what you can see on screen and nothing else.

ON THE WAY UP


Better than the old iteration, he with enough money to dedicate to
traditional media wins. For example, read their story on label services here: http://buswk.co/1b4i8f8


If you're afraid of data caps at AT&T and Verizon…you don't realize that wi-fi is becoming ever more ubiquitous and that you don't need a high cellular ceiling.


People will spend more on these than they will on desktop or home speakers. If for no other reason than people can see their purchase, there's a status component, but quality does matter.


Only baby boomers are afraid of new technology, everybody younger has grown up with it and expects it to work and continue to do so. Odds are what you've got will be superseded before it breaks. So, the homes of Gen Y will all have Nest thermostats and so much more. There's a ton of money to be made here.


Because no one's got any time. They'd rather buy what they want and return it for free if they don't like it. Wasting time to drive to a brick and mortar store to find out what you want is not in stock is something you do only once.


It's the story of the age. Multiple players who merge to make one or who are killed by he who ultimately dominates. To make money today you've got to have an innovative product, priced right, i.e. cheaply, which gets better and better. Innovate or die applies across all spectra today. We don't want yesterday's news, or smartphone or computer or television… You use it and then throw it away.