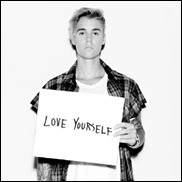 
I listened to the Spotify U.S. Top Fifty and this was the best song on it.


Second best was Robin Schulz's "Sugar," which stalled on the U.S. chart, but has an amazing hook, sampled from the 2004 Baby Bash smash "Suga Suga." Huh?


That was over a decade ago, I'd never heard of Baby Bash, but when I went back and listened to the original, goddamn, it was a hit. How is anybody supposed to keep up with this stuff?


The two "Sugas" are the same record but they're not, both have this guitar part that might not be "Sunshine Of Your Love" or "Layla" but Eric Clapton hasn't whipped off something so captivating in decades.

Not that the rest of the chart was as compelling. Too much canned percussion, too much stuff that sounded like everything else, and then there was "Love Yourself." It was quiet where the other tracks were loud, intimate were the others were playing to the bleachers, and featured instrumentation completely different from everything else too.


It's everything Justin Timberlake built his reputation upon, but purveyed by someone with a much worse image, that is Justin Bieber.

And there's the cultural difference right there. Boomers and Gen-X'ers went to bars, where they drank, swayed to the jukebox, maybe danced to a live band, but the Millennials… It's a completely different experience, the club is upscale, it resembles an amusement park, there's always a deejay, it's where you go to jockey for position as well as find love and hang with your friends. That's right, the kids are all about the group, which may explain why there are so many writers on all their tracks. We think they need help, but maybe collaboration is inbred.


"You think you broke my heart, oh, girl, for goodness' sake
You think I'm crying on my own, well I ain't"


The boy doth protesteth too much. It'd be one thing if the track was a bombastic number full of over the top anger, but it's not, it's quiet, and therefore you can tell…he still cares. Whew! It's all over the track, he's kissing her off but only because he needs to separate himself, pull himself up to higher ground, survive.


"And I didn't wanna write a song
'Cause I didn't want anyone thinking I still care, I don't"


The anti-Taylor Swift. He's reluctant, at least that's the posture, he's not loading ammo, pulling back the string of the bow, but he's got to say his piece. He doesn't want to draw attention, but she's gone too far.


"But you still hit my phone up"

This sticks out, locates the song in the present, but it works, because this is how the younger generation behaves, the phone is the center of communication, only unlike in the past everybody's got their own and they never talk on it, unless it's to their parents. The communication is endless, all day, as opposed to waiting to get home to your parents' house to dial your crush to ask her about the homework.


"My mama don't like you and she likes everyone"


This is the true hook, this is what puts "Love Yourself" over the top. Sure, it hearkens back to a previous era, when you asked permission to go on a date, never mind get married, when everybody lived in the same neighborhood, but we all know mothers like this, who are invested in their children, who want to know their friends and give them the benefit of the doubt. The mamas we like to hang with, go to their houses to talk to them. And when they give everybody thumbs up but not her, you know she's bad news.


"'Cause if you like the way you look that much
Oh, baby, you should go and love yourself"


He'd really rather use the f-word, but he didn't. And has added a whole new meaning to boot. We know the type, who is so busy putting on her look, being perfect, being stuck up, that no one can really penetrate them, they really don't want to be known, only exalted, and it's our flaws that make us lovable anyway.


It's men who switch teams, not in the "Seinfeld" way, but as in giving up their old life to switch to a new one, that of their beloved. For all men's swagger, women are the social directors. Men can be manipulated, they want to make you happy, you've just got to own your power.


Justin is trying to extract himself from her web.

But this track is really not about the words, well, other than that bit about his mama, but the sound. In an era where we're constantly beat over the head there's almost nothing on it. Just a guitar that could have come out of a jazz club and ultimately an otherworldly sax solo that seals the deal.


Credit Ed Sheeran, the song's cowriter. Once you know Sheeran was involved you can hear him in the song, the way the verses descend.


And it's easy to criticize Bieber, say he's just a frontman, not responsible.


And who knows, that may be true.


But what is also true is "Love Yourself" is a stone cold smash, far superior to the vaunted tracks in other genres played by those inured to the old system, before Napster, when the internet blew up everything we knew.


I know, I know, an album should be a statement straight from the heart written only by those involved, in the band, preferably one or two people. And the perpetrators should have dignity, should not say they're the greatest and overhype themselves.


It's hard to separate the image from the music. Bieber not only grew up in public, he demonstrated his ignorance and bad judgment. He pinballed from one mistake to another, the stories were everywhere. Funny I know he got stopped in a Lamborghini and egged a house but hadn't heard "Love Yourself."


Of course I'd heard "Where Are U Now," but I gave credit to Diplo and Skrillex, the former the king of Spotify, admirable for testing limits and coming up with a sound that is instantly ear-pleasing but one step beyond, and the latter notorious for the sounds that permeate this hit track.


And Howard Stern's posse cannot stop making fun of "What Do You Mean?" and its infectious bounciness, but that's just the point, it's contagious.


And I knew "Sorry" too. Its breeziness allowed me to dismiss it as pure pop in a long tradition thereof, sure, it was a hit, and I liked it, but was it really that great?

It is. With much more on the track than is on "Love Yourself," it's got that incredible hook and great chorus. It's one of those cuts you like more the more you hear it. I dismissed it as an apology, which Bieber has done too much of, but the song transcends that element.


And then comes "Love Yourself."


And now I'm reevaluating. I'm wishing I'd seen the Biebs at Staples Center. Because he's equaling Madonna, coming up with indelible cuts on a regular basis even though both are inches from the precipice.


But like the Beatles, the tracks have twists and turns that are immediately endearing.


And like Joni, Bieber is testifying, speaking from the heart.


And like Stevie, innovative sounds are all over the records.


The cuts aren't even derivative, which is more than you can say about the work of the aforementioned Mr. Timberlake.


It's confounding, everybody aged rejects him but the youngsters consider him part of the firmament, they've grown up with him, and unlike most teen popsters he didn't have an instant expiration date.


And one can wonder how responsible he truly is.


But one cannot argue with the result.


So maybe things are not as bleak as they seem. Maybe rock is dying for a reason, a dearth of memorable cuts that are so repetitive they don't endear a younger audience which has Led Zeppelin at its fingertips anyway. And the rest of the aged wannabes and barely-theres, you've got to be a diehard fan, listen ad infinitum to get hooked by their music, whereas this Bieber stuff reaches you right away.

But the media assault has been overwhelming and overbearing. We don't want to hear anything more about him, but we do want to hear more of his music, if it can fight through the scrim of his public persona and the unending story.


He's got a better voice than Twizzle Stick and he's less vindictive and even though he's growing up in public too, he's not ping-ponging from obsessed to lovable, begging us to care. Hell, Biebs just canceled his meets and greets.


If you listen to these tracks and reject them, don't understand why they're successful even though not in your chosen genre…


You're full of sour grapes.


BUT THE LITTLE GIRLS UNDERSTAND!