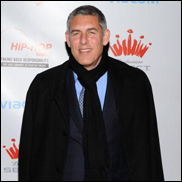 Falafel King. On Broxton. In Westwood. That's where we met.


And I couldn't help feeling it was part of Warner's austerity program.


Lyor flies United. Coach. Sure, he uses his miles to upgrade to business, but there are no black cars at Warner anymore, Jet Blue is the company airline, you see the music business is in the middle of a storm, and Warner's battened down the hatches, is doing its best to sail through.


One thing you can't argue with is Warner's increased market share. Sure, Universal is still the behemoth, but Warner is growing its piece of the pie. As for overall revenues?


Well, Lyor hopes they go up. He spent the morning at Cricket, looking at their mobile music model. He said the interface was fantastic. And that a music fee was just going to be added on to the bill of these customers without contracts.

I'll have to wait to see it.


But I must say, Lyor was not unfamiliar with the issues.


He spoke of transparency. We needed it. A manager, an act should be able to log on every day and see where their music was streamed, what they got paid. Is this ready today? No. Is this in the near future? No. But Lyor said it was inevitable. Trust must be reestablished.


Trust and magnificence. That's a word Lyor uses quite a bit. He doesn't want to release good music, but MAGNIFICENT music. Fewer artists doing it incredibly well. How long it takes them to break?


He doesn't believe in the old model, of balls to the wall, hype it in every medium ad infinitum. His philosophy is more akin to Paul Masson's… Didn't Orson Welles claim that no wine would be sold before its time? Lyor believes you've got to be wary of the backlash, of burning your act out before it gets its start.


You've got to invest, develop, wait for that magic moment, the track that will put the act over the top.

Lyor paid 5 mil for the Jay-Z album because of what the rapper told him. That this was the first album Jay didn't cut to a schedule. The tracks came together organically, this was the record Jay wanted to make, was ready to make. Sure, Lyor heard a few cuts before he made the commitment, but he didn't hear "Empire State Of Mind". But he trusted Jay.


But how do you get paid in the future? Lyor referenced a meeting with Prince, who was as concerned about this as Bono, not for himself, but acts coming up.


Lyor believes there's no bump coming in the future, no CD replacement business about to blow the business up. But he hopes that cloud computing will deliver increased revenue. If it doesn't?


Well, Lyor's already making 50/50 deals. He anticipates more if recorded music income doesn't increase. He wants to be partners with the acts. For a long time. In 360 degrees of revenue.


Sure, Warner missed out on a few deals, deciding not to overpay for one hit wonders. For two years, Lyor felt a bit in the wilderness. Truly, scoping the hinterlands for acts that would be willing to sign a 360 deal. But now everybody realizes this is the future. But is every company prepared to play in the new world?


Warner cut $400 million in overhead almost overnight. Sure, this entailed firing a bunch of people. Like the 52 year old promotion man. What was he going to do now? Lyor expressed compassion, contrary to his cutthroat reputation.


Then again, maybe Lyor is cutthroat. As in running a gang, that he will defend to the limit. If you're on Lyor's team…


Rob Cavallo. Lyor speaks with him thirty times a day. It's important to guide talent. To ask questions, raise issues, express the parameters, to ultimately get not only what you want, but to satisfy the talent too. People like to know where they're going.


But what impressed me most was the story Lyor told of going to the second floor of his townhouse and cranking the vinyl to the max and leaning forward, into the music.


All this talk about TV syncs, commercials, video games… In all those media music is in the background, you experience it leaning back. Music needs to be up front and center, people need to experience the magic!


The record Lyor was playing for his girlfriend?

Yes, you might see him as the hip-hop maven. I was surprised this was the record he was playing. But great records affect you this way… It's not about bumping asses in the club, it's about wanting to get closer, to feel it, to get inside.


Does Lyor mangle the language?


Absolutely. He repeatedly talked how bosses "incent" him. I could have corrected him, but I got the point, so why.


And if I made points he didn't get, Lyor said so. As in, he was not afraid to appear less than knowledgeable.


As for that exorbitant compensation? Lyor believes he earned it. He's put in 100,000 hours. He increased market share. What's the value of that?


Yes, Lyor believes in himself. And his confidence is infectious. If you're an act, looking to make a deal. He appears to be living in reality. When all the press about the major labels is they wish the nineties would come back. Lyor knows the twentieth century is history. It's about finding out how to make it work now.


Now the last time I got together with Lyor, I couldn't get a word in edgewise. On one hand, I dreaded today's meeting. Because I can only listen for so long. But this was different. This was a conversation. Hell, I told him if we were going to the cloud, why not blow out MP3s today, no one's going to want them in the future, just like no one wants cassettes. He thought that was an interesting idea. Maybe they should.


And he told me a lot of stuff that I can't repeat here. Not because the stories were so juicy, but because they exposed the blind spots of his competitors.


Did Lyor close me?


I'll say that he's akin to Michael Rapino. They're cut from the same cloth as Steve Jobs. You sit there, listening, and they convince you. They call Steve Jobs' web the "reality distortion field". Is Rapino distorting reality? Well, maybe he's juiced up, high not on alcohol, but the adrenaline it takes to tackle Live Nation's problems, but he understands those problems, he realizes Live Nation's job is to find innovative ways to sell more tickets, to partner with acts to grow revenue. Anybody can put on a show. But can you do more? As for Lyor… It's hard to argue with two things… Warner's aforementioned increase in market share and the fact that Warner derives a larger percentage of its revenue from digital than any other major record label.

Hell, the challenge used to be distribution, how do you get the record in the store, how do you get paid. But those were the old days. Today, you've got to convince an act that you'll stick by it, not pressure it to take short cuts, to take the easy way out for short term revenue, all the while encouraging them, guiding them to create that one breakthrough event, whether it be a single or a live show, but whatever it is, certainly rooted in music.


Do you want to make a deal with Lyor?


Well, he doesn't want to waste money. It's not only the cash involved in acts you drop, but the man hours, the opportunity cost, he wants to get it right.


I think he could close you.


Did he close me?


All I can say is I had no need to argue with him. He showed up on time, stunning me, I haven't had this experience with a major exec in memory, and he listened to me and agreed with my take on the reality of the business. Like the fact that the average customer is hungry for music, but doesn't know where to go, doesn't know what to play.