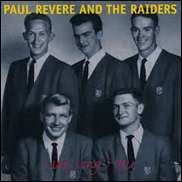 They were the house band for "Where The Action Is," only half an hour long, but the MTV of its era.


Used to be summer was a sleepy season, when television was filled with nothing but reruns, in this pre-internet era young kids could actually be bored.


But the one thing they could never get enough of was the radio, the sound emanating from their transistor, the iPod of its day, but much cheaper, everybody had one, or two, and at first you listened to the baseball game but then you graduated to the top forty station in your neighborhood, which was the epicenter of the culture. We tuned in to know not only the tracks, but to be members of the club, the deejays were our older, hipper brothers, and we were all along for this wondrous ride when the Beatles came out of nowhere and turned this entire nation upside down.

Suddenly, the young took over the country, they revolted not only against their parents, but the entire nation, ultimately refusing to go to Vietnam and protesting our involvement therein. It was like there was something in the air that truly made everybody think different, and that was music.


So the Beatles revolutionize society before they even record a song with that title and then we're all rushing home at 2 PM to catch a black and white TV show featuring the heroes of the day in a season when there was no homework, when we could just ponder the wonders of life 24/7.


And at this point, Paul Revere & the Raiders had no hits, just a lame Columbia album of covers we saw in the bins that we could not afford and had never heard. But the band didn't seem to get the memo, they were having so much fun on the show. It was visuals like this that made me and so many of my generation want to move to California.


And now this merry band of pranksters were cool! No one could deny "Just Like Me" rocked, from Mark Lindsay's attitude to Drake Levin's guitar solo, this was a smash. Paul Revere & the Raiders graduated!


The apotheosis was "Kicks," we were already jaded, we knew they kept on getting harder to find, but that did not mean we stopped searching.


"Kicks" is not "Born To Be Wild," but if you're writing the story of sixties American rock, the Raiders track would be included.


And almost as good were "Hungry" and "Good Thing."


And sure, the band ultimately had a hit with "Indian Reservation" in the seventies, but that was a coda, different players with a different sound, it was really about the sixties.


And Paul Revere rode that success all the way into the twenty first century, all the way until August of this year, when illness forced him from the road.


He was an American success story. Pluck and desire got him there. That was always the dream. That even if you were from godforsaken Idaho, if you wanted it enough, you could get it.


And Revere was not warm and fuzzy, he was not lovable, but he persevered and survived until Saturday, and for that he belongs in the rock and roll firmament, if not the Hall of Fame.

"Girl, I'm gonna have it all some day if you'll just hang on to my hand"


He needed her to fuel his desire.


"If I break some rules along the way, girl
You, you gotta understand"


That's right, today musicians bitch the techies are not playing straight, but once upon a time they wrote the book, they tested limits and stayed far from the corporations, selling out was anathema.


That's how so many of us were, we wanted more. And we saw no ceiling, nothing in our way. We all had good public school educations, we could cogitate, we were all…

"Hungry for those good things, baby
Hungry through and through
Well, I'm hungry for that sweet life, baby
With a real fine girl like you"


That was the currency, even more than dollars…girls, sex. You picked up your axe, burnished your image, went on the road and…


They lined up to get close, to get a little of what you got.


The musicians were not nerds, they were the coolest.


Jimmy Iovine may have all the money, but he's got a fraction of what Paul Revere and the rest of the players got. We were in thrall to the people on stage. They were our heroes. Blazing trails. Enlightening us and illuminating our lives.


I know he's not resting in peace, but tickling the ivories on that celestial Vox Continental, creating a band to keep all the angels entertained. Because playing music is in the blood, you can never give up and go straight, work for dad or the company, you live on stage, it's the only place you're comfortable, the only place you want to be.