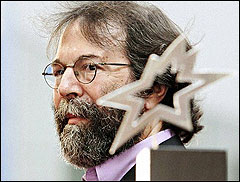 Avrich is known for his documentaries, the newest of which, The Last Mogul: The Life And Times of Lew Wasserman, opened in Los Angeles in June and in Toronto a month later.

Written and directed by Avrich, The Last Mogul is the rags-to-riches story of a Hollywood titan who was chairman and chief executive officer of the Music Corporation of America (MCA) and Universal Studios.

The topic attracted him primarily for two reasons. “I was told it couldn’t be done, and I was fascinated by his depth of power. Every mogul deferred to him.”

Wasserman, who died in June 2002 after 59 years in the industry, wielded enormous power during his era. Only with the hindsight of his death did Avrich realize how incredibly dominant a figure he had been in Hollywood.

Since The Last Mogul was made without the authorization of Wasserman’s family, particularly his widow Edie and his grandson Casey, Avrich found himself embroiled in problems he might otherwise not have encountered.

Most dauntingly, prospective interviewees did not want to go on the record for an unauthorized documentary, fearing they would offend his still influential family and friends.

“I was told I wouldn’t get interviews, financing or a distributor. ‘You’ll never eat lunch in this town,’ they said. My response was, ‘I’ll eat dinner.’”

Due to what he claims was meddling on the part of the Wassermans, Avrich lost interviews with about 10 individuals who had worked with him – including Steven Spielberg, Barry Diller and a host of talent agents – and the chance to examine Universal’s archives.

“We were thrown off Universal’s lot,” he said ruefully.

In addition, he received an intimidating cellphone message advising him to cancel the project altogether.

“I was a little nervous about that phone call, but I didn’t think I was in harm’s way.”

Strangely enough, however, the current president of Universal Studios, Ron Meyer, took a yen to The Last Mogul after watching it at a special screening.

“He loved it and wanted to be in the movie,” Avrich recalled.

Much to Avrich’s surprise and delight, Meyer went as far as to invite him for lunch at Universal’s commissary and, better still, seated him at Wasserman’s old table.

Avrich thinks that the family’s refusal to co-operate was a reflection of their concern that unsavory details of Wasserman’s life might be exposed.

“Some people, such as Wasserman, are not interested in reliving their past,” he said. “Wasserman did not want to rehash the fact that he had been associated with mobsters.”

In retrospect, Avrich regrets that he never met Wasserman, whom he greatly admired. As he put it, “He could understand every facet of the business and be great at it.”