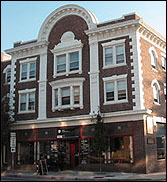 BRYN MAWR, PA (CelebrityAccess MediaWire) — After seven years as a prime Pennsylvania venue, The Point will be leaving its Bryn Mawr location in search of new digs. Having hosted over 1450 shows with over 140,000 tickets sold, the Point gained a national reputation as a comfortable room for artists to develop their careers.

After months of negotiations, the 125-capacity venue and its landlord were unable to settle disputes over a new lease agreement that would upgrade the kitchen area, add a liquor license and renovate the interior.

“Due to the landlord’s concerns of how our liquor license would impact the neighborhood, we were unable to come up with a lease term that would justify that kind of a financial investment,” Richard Kardon, owner of the Point, said in a statement. “It is unfortunate as I believe we brought a lot MORE to the community and I believe our plan would have had a positive impact on the future growth of Bryn Mawr. We are saddened to be leaving.”

Kardon insisted that the Point is not closing, however.

“We are aggressively searching for a new location,” he said. “We will continue to do shows at The Colonial Theatre in Phoenixville, as well as producing outdoor events like Eagleview Concerts on the Square, co-production of the Sundown Music Series (with our friends at Jack Utsick Presents NE, Inc.) and the Philadelphia Weekly Concert Series. In addition we will be looking at utilizing other venues in the area to produce shows for our regular artists.”

The final show at the Bryn Mawr location will be Jim Boggia on June 25th. Boggia has performed over 40 shows there during its tenure. –by CelebrityAccess Staff Writers